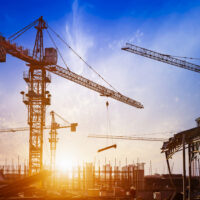 On May 31st, a four-ton heating and air-conditioning unit came crashing to the ground in the middle of Madison Avenue. Ten people were injured by the accompanying falling debris and broken glass, and seven were taken to the hospital for their injuries.

The HVAC unit was being lifted by a crane and hauled to the top of the high-rise office building at 261 Madison Avenue, where it was to be maneuvered into the control room at the top of the building. Unfortunately, a rigging strap holding the unit to the crane snapped, and the unit consequently went swinging and crashing into the side of the building as it fell before slamming into the ground in the middle of Madison Avenue with a sound “like a freight train,” according to an eyewitness to the crash.

The crane was owned by Bay Cranes and operated by Skylift Contractor Corp., and records show a previous crane collapse was attributed to a Bay Crane operated by Skylift. The local buildings commissioner claimed that a recent inspection showed the crane in compliance with safety standards, although the commissioner did not provide the date of when that inspection occurred.

Injuries at New York City construction sites have increased for 2015 compared to last year, with 125 people injured in the last six months and at least three fatalities in the last three months, including the fatal knuckle boom accident in Midtown Manhattan in April, just a little more than a month prior to this injury-causing crash.

By Leandros Vrionedes | Posted on June 10, 2015
Skip sidebar and go to footer