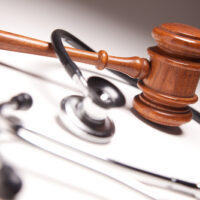 The California legislature first put a cap on noneconomic damages (pain and suffering) in medical malpractice cases in 1975, with the passage of the Medical Injury Compensation Reform Act (MICRA). Under MICRA, a person cannot receive more than $250,000 for pain and suffering caused by a doctor’s medical negligence or incompetence, regardless of the level of the doctor’s malpractice or the severity of the injury. The consumer group Consumer Watchdog California is currently circulating an initiative petition to adjust the $250,000 for inflation, something which has never been done once in the nearly 40 years that the law has been in effect. The new cap would be $1.1 million for noneconomic damages if the petition gets on the ballot and is approved by the voters. Economic damages, such as medical bills and lost wages, would remain uncapped.

New York State currently does not have any statutory cap on medical malpractice damages, although some attempts to enact one have been made. Such a cap was proposed in Governor Cuomo’s 2011 budget, for instance. The amount proposed was $250,000, the same amount enacted in California in 1975 and that Californians are now trying to more than quadruple. $250,000 in 1975 dollars is worth only about $57,000 today, according to the Consumer Price Index Inflation Calculator. This move by the Governor was strongly opposed by consumer groups (Public Citizen called it “arbitrary and inhumane“), and it was left out of the final budget passed by the legislature. If such a cap were to be imposed, New Yorkers would be severely restricted from receiving fair compensation for their pain and suffering in a case of medical malpractice.

Even without a cap on damages, it can be difficult to get full compensation for your medical malpractice case. Doctors and their insurance companies go to great lengths to avoid being held liable for a medical error, even hiring other doctors to testify that no malpractice occurred or accusing you of exaggerating your illness or causing your own injury. An experienced personal injury attorney is vital to making sure you receive the true value of your claim. In New York City, Nassau and Westchester County, contact Leandros A. Vrionedes, P.C. for a free consultation regarding your right to compensation for injuries caused by a doctor’s incompetence or medical neglect.