Will the Supreme Court Open the Door to Retaliatory Arrests? 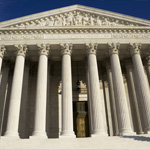 In a case argued before the United States Supreme Court on March 21st, the court may open the door allowing the police to arrest people in retaliation for exercising their First Amendments rights, so long as the police can show they had some other probable cause to make the arrest.

The case heard by the court is Reichle v. Howards (see Howard v. McLaughlin for the Tenth Circuit appellate decision). In 2006 the plaintiff, Howards, was taking his son to a piano recital at a mall where Vice-President Dick Cheney happened to be holding a meet-and-greet. Upset by the war in Iraq, Howards was overheard by Secret Service agents telling someone on his cell phone that he is going to ask the vice-president “how many kids he killed today.” Howards did in fact approach the Vice-President and told him that his “policies in Iraq are disgusting.” As Mr. Cheney turned away, Howards touched the vice-president on the shoulder.

Howards was later interviewed and eventually arrested by the Secret Service. Although the government could establish probable cause for the arrest based on Howards’ physically touching Mr. Cheney, it appears that the basis for the arrest lay in the provocative statements Howards made to a third-party over the phone and possibly to Cheney himself – statements that are arguably protected speech under the First Amendment.

The court has previously held that claims against retaliatory prosecution are barred where probable cause existed for the arrest (see Hartman v. Moore). Will the court rule any differently in a retaliatory arrest case, where the same people making the arrest (with probable cause) are the very ones with the wrongful motive? It may be many months before the decision is issued, but based on the questions posed by the justices during oral argument, our crystal ball tells us the government may prevail. The upshot of such a ruling could be to make it harder to succeed on a civil rights claim under section 1983 where there are “mixed-motives” behind the government’s action.

Check back in with this blog, and we’ll report on the decision when it comes out. In the meantime, if you or a loved one has suffered a violation of civil rights in New York City by government actors, contact Leandros A. Vrionedes, P.C. for a free consultation regarding your options.

By Leandros Vrionedes | Posted on May 19, 2012 Tags: Will the Supreme Court Open the Door to Retaliatory Arrests?
Skip sidebar and go to footer