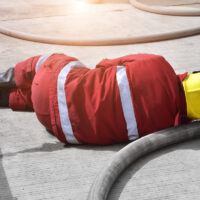 In an opinion recently released on May 20 by the Supreme Court for Westchester County, the court considered a claim for damages by a firefighter who suffered serious injuries fighting a fire which the plaintiff asserted was caused by a negligent act of the building’s occupants.

The case of Bucaj v. Capra Re Inc., centered around a fire that occurred at La Fontanella restaurant in Pelham on March 16, 2012. The plaintiff, a Village of Pelham firefighter, was injured when he poked the ceiling while looking for hidden pockets of fire and was struck by a falling 4’ x 4’ portion of the ceiling. According to testimony given in a deposition by the restaurant’s manager, the manager stated that he may have spent his break smoking a cigarette in the restaurant’s basement offices, and that he later discovered smoke coming from the basement when he returned there ten minutes after his break. An investigation by the county’s arson task force investigated the fire; as to the fire’s cause, their report stated, “cannot eliminate electrical or smoking,” and determined that the fire originated in the restaurant’s basement.

The plaintiff firefighter filed a lawsuit against the restaurant’s owners and landlord, including a claim for damages based on New York General Municipal Law § 205-a, and for general negligence, both of which are explained further below. Defendants moved to dismiss the firefighter’s claims, arguing that he was not entitled to money damages, having already known of and accepted the risk of this type of injury inherent in firefighting, and thus being barred from receiving money damages. The court dismissed the firefighter’s claim for general negligence, but allowed his claim under § 205-a to move forward toward trial.

Generally, employees of an inherently dangerous profession, such as firefighting, will not be entitled to money damages from a lawsuit for injuries they receive while doing their job. However, under New York law, specifically General Municipal Law § 205-a, a firefighter can bring a claim for personal injury damages where the injuries were the result of negligent or willful breaking of a law or ordinance. According to the court in the Bucaj case, in order to succeed on such a claim, the firefighter must “1) Identify the statute or ordinance with which the defendants failed to comply; 2) describe the manner in which the [firefighter] was injured, and 3) set forth those facts from which it may be inferred that the defendant’s negligence directly or indirectly caused the harm.” In order to sustain such a claim, the plaintiff does not have to prove that their injuries were the direct result of the defendant violating the alleged statute or code, but instead only that there was some connection between the plaintiff’s injuries and the defendant breaking a law which established clear duties on the defendant.

In this case, the plaintiff claimed that the restaurant’s manager violated the Westchester County Smoke-Free Worksite Law, Department of Health codes, and New York Clean Indoor Air Act laws by smoking a cigarette in a place of employment. The court proceeded to analyze each law and the requirements imposed on the restaurant under each law, and ruled that a jury could reasonably reach the conclusion that the basement office was part of a place of employment, and if the restaurant’s manager was found to have smoked a cigarette there, then the violation of that ban on smoking in a workplace could reasonably be found to have had the end result of the fire that caused the plaintiff’s injuries.

The plaintiff’s second claim was a standard claim for negligence committed by the restaurant owners. Under the “Firefighter rule,” police officers and firefighters are typically prevented from recovering money damages for injuries they receive on the job which result from “risks associated with the particular dangers inherent in that type of employment.” (Bucaj opinion.) However, these public employees could make a claim for an injury that merely occurred while they were doing their job, and was not the sort of injury they took the risk of incurring by working in a dangerous field. The example offered by the court was that a police officer could sue for injuries caused by being hit on the head by a falling flowerpot while he was responding to a call, but could not recover for injuries resulting from being punched by a suspect resisting arrest, as those are the sorts of injuries that police officers are paid to risk incurring. The court determined that the injuries caused by burned and falling material during a fire are the sorts of injuries inherent to the profession of firefighting, and dismissed the general negligence claim.

If you are a police officer or firefighter who has been injured on the job in New York, ensure that you and your family receive the compensation you need to cover your lost wages and medical expenses by obtaining knowledgeable and determined legal counsel to assist you in pursuing a claim for damages. Contact New York personal injury lawyer Leandros A. Vrionedes for a consultation, in New York at 212-889-9362, and in Queens at 718-777-5895.

By Leandros Vrionedes | Posted on June 17, 2016
Skip sidebar and go to footer