Texting Behind the Wheel Grows, despite Laws and Dangers 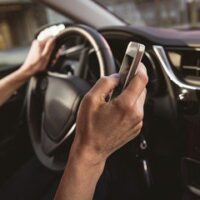 Texting and driving has been blamed by many experts as the reason for the rise in roadway deaths in recent years. Many states have responded to the threat of distracted driving by enacting laws that make it illegal to text or otherwise use a cell phone while driving. Unfortunately, neither safety warnings nor laws banning the practice seem to be successful in deterring drivers from using their phones while they drive. One study has found that more drivers than ever are on their phones for a growing percentage of their drive. Read on to learn about this study, and contact a seasoned Manhattan injury lawyer if you’ve been hurt in an accident with a distracted driver.

App tracks phone use while car is in motion

The study in question was released by Zendrive, the makers of software used by insurance carriers and ride-hailing apps to track a driver’s phone use while they’re behind the wheel. Zendrive gathered anonymous data from its 4.5-million users’ phones to track the number of times that drivers use their phones while their car is in motion, the amount of time that drivers spend on their phones, and what time of day that use occurs.

Zendrive found that roughly 60% of all drivers use their phones at least once while they’re driving, which they estimate to mean that about 69 million US drivers are on their phones while behind the wheel. This volume of phone use has been blamed by many experts as one of the leading reasons for the 14%+ rise in fatal car accidents that occurred between 2014 and 2016. “As you have more young drivers on the road, and as people increasingly become addicted to their smartphones, it will continue being a major health issue—almost an epidemic—in this country,” explained Jonathan Matus, the CEO of Zendrive.

Drivers using their phones for longer

Not only are more drivers on their phones when driving; the average driver who does use their phone is on the phone for even longer than before. The average driver spent 3 minutes and 40 seconds on their phone in 2017, which is a 5% increase over the amount tracked in the previous year. In New York, the average driver spent nearly 6% of each drive on the phone in 2017, which is an almost-17% increase over 2016’s average. 4:00 pm is the time of day when behind-the-wheel phone use appears to be greatest, with about 75% of drivers using their phones around this time. New York has banned handheld cell phone use, and drivers who cause injury accidents due to driving while distracted can face civil liability through a personal injury lawsuit for their negligence.

If you’ve been injured by a distracted driver in New York and need help seeking the money you’re owed for your injuries, contact the seasoned and knowledgeable Manhattan personal injury lawyer Leandros A. Vrionedes for a free consultation at 212-889-9362, or in Queens at 800-634-8144.

By Leandros Vrionedes | Posted on April 30, 2018
Skip sidebar and go to footer