Students tripped on a field trip: What is the school’s duty supervise? 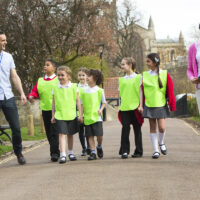 In the recent case of Lennon v. Cornwall School Dist, the Appellate Division of the Supreme Court of New York, Second Department decided a case involving a school district’s liability where one student injured a couple of other students. The Second Department covers Richmond, Kings, Queens, Nassau and Suffolk counties, among others.

The pivotal points around which the case turned revolved around two central questions:

In affirming the lower court’s 2013 decision denying summary judgment to the school district, the appeals court said that the school district failed to show it was entitled to judgment as a matter of law. The questions above will need to be decided by judge and jury at trial, if the parties cannot settle the case first.

The accident in question occurred during a field trip to the zoo, when an 11-year old male student ran out of an exhibit and collided with two female students, allegedly knocking them down and causing injuries. The facts are in dispute whether the boy was being chased and accidentally ran into the girls, or whether he intentionally pushed them.

The court’s opinion leads off with a couple of references to other New York cases for the following principles:

In the opinion of the court, the school district did not eliminate all the factual issues in the case with the evidence it presented, which relied heavily on the testimony of the injured children and school district employees. Therefore, the school is not entitled to a summary dismissal of the complaint against it, but must instead defend itself at trial.

One judge disagreed with his colleagues and argued that the school had met its burden by showing that the child’s impulsive act could not have been reasonably anticipated. In this judge’s dissenting opinion, a school has a duty to adequately supervise children but cannot be an insurer of students’ safety against every type of injury or accident. This may be true, and the school district may eventually prove that it either could not have prevented the injury or did not have a duty to prevent it, but that will be a matter for the jury to decide, and the injured plaintiffs are going to get their day in court to try and prove their case. Of course, now that the school district knows it will have to face a jury and defend itself in court, it may be more willing to come to a reasonable settlement with the plaintiffs.

Surviving a summary judgment motion to dismiss the case at the trial and appellate levels is crucial to the eventual success of your claim, and requires the assistance of a knowledgeable, experienced and dedicated attorney working for you. In New York City, call Leandros A. Vrionedes, P.C. at 1-800-634-8144 for a free consultation on your injury claim.

By Leandros Vrionedes | Posted on October 30, 2015
Skip sidebar and go to footer