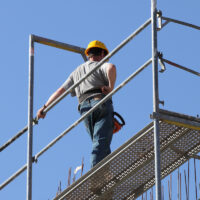 Last week we talked about a recent New York Court of Appeals case that applied the scaffold law (Labor Law 240(1)) to a worker who fell from a catwalk while working on a billboard. That very same day, the court handed down another decision regarding a different worker fall. This time, however, the court held that the scaffold law did not apply. What was different?

The case of Nicometi v. Vineyards of Fredonia involved a worker in the process of insulating a ceiling. In order to reach the ceiling, Nicometi was wearing stilts. As he took a step forward, he slipped on a patch of ice and fell onto the concrete floor. Nicometi sued the owners of the property as well as the general contractor on the project.

Both cases involved a fall from a height, so shouldn’t section 240(1) apply to both cases? The trial court had initially granted Nicometi’s motion for summary judgment, holding the defendants liable as a matter of law. On appeal, a divided panel of judges overturned that decision, deciding that there were enough facts in dispute to warrant a trial on the issue of liability. All five judges agreed, however, that Nicometi’s fall on the ice while wearing stilts was an elevation-related accident covered by 240(1).

The Court of Appeals, on the other hand, disagreed that the scaffold law applied at all. This court stated that 240(1) only applies “where the plaintiff’s injuries are the ‘direct consequence’ of an elevation-related risk.” The court compared this case to a prior case where a worker on stilts tripped over a cord; the cord on the floor was not an elevation-related risk, so 240(1) didn’t apply.

Who “placed” the stilts on the ice?

The scaffold law requires that appropriate safety devices be “constructed, placed and operated” to give proper protection to a worker. Nicometi was standing on any icy patch when he slipped, and the evidence was conflicting whether his supervisor told him to work there or told him to avoid icy patches. By giving Nicometi stilts to use in performing the job, was the contractor “placing” safety devices within the meaning of the law?

Nicometi did not have to use stilts to reach the ceiling and complete his work. He could have used a ladder. It seems clear that when a ladder is placed on an icy surface, and the ladder slips causing a fall, 240(1) applies. But were Nicometi’s stilts “placed” on the icy surface the way a ladder could be, or is the accident his fault because he walked onto the icy surface? Although one judge felt that the stilts were placed on the slippery surface just as a ladder would be, the majority of justices on the appeals court decided that stilts are not “placed” like ladders are. The majority ruled that Nicometi had been provided with the appropriate devices to complete his work safely, so section 240(1) was not violated.