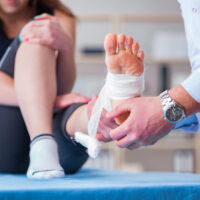 In a case coming before the Appellate Division of the New York Supreme Court, the judges reconsidered a motion for summary judgment based on the argument that the plaintiff had not suffered a serious injury such that they had overcome New York’s injury threshold. Strong testimony from the plaintiff’s medical experts helped to keep the victim’s claims before a judge.

As we’ve discussed in a previous post, New York places limits on when a victim of a car accident can file a lawsuit for money damages based on their injuries, rather than simply relying on auto insurance to cover their claims. To overcome the so-called “injury threshold,” a car accident victim must show that they’ve experienced either a substantial financial loss valued at over $50,000, or a serious injury. “Serious injury” can include fractures, dismemberment, a significant limitation on use of a body function or system, and prevention from doing “substantially all” regular daily activities for at least 90 of the 180 days following the accident.

In Da Costa v. Gibbs, the court took a careful look at testimony from the plaintiff’s and defendants’ expert witnesses to determine if the injury threshold had been cleared. The plaintiff had appealed from the trial court’s granting of the defendants’ summary judgment motion to dismiss plaintiff’s claims for injuries to her spine and hand following a car accident. The plaintiff had filed a lawsuit seeking money damages for injuries to her lumbar and cervical spine, including treatment for symptoms related to scoliosis, as well as a deformity which left her right hand deformed. The trial court had found testimony from the defendants’ experts convincing; namely, that of an orthopedist who had found that the plaintiff had full range of motion, and a neurologist who found plaintiff’s hand injuries to be unrelated to the accident.

Expenses related to treatment for a pre-existing condition such as scoliosis would not normally be money an accident victim could seek in a lawsuit, and evidence of the presence of such pre-existing conditions have condemned many lawsuits to failure in the past. However, the plaintiff’s chiropractor was able to show why the plaintiff’s scoliosis treatment was in fact related to her accident injuries. He explained that the plaintiff had never before experienced symptoms of her scoliosis, and no medical records existed showing that she had been treated for it previously.

Similarly, while the plaintiff’s clawhand deformity in her right hand had not occurred as a direct result of the accident, the testimony of her physician was invaluable in proving it was accident-related. In response to the defendants’ expert testimony, the plaintiff’s pain management physician testified that he believed her clawhand deformity resulted from a trigger point injection into her spine, administered for spinal pain relief. The court explained that at-fault drivers are liable not only for injuries that are a direct result of the accident they caused, but also for injuries caused by negligent medical care for accident-related injuries. The Appellate Division denied the summary judgment motion, reversing the trial court’s decision and allowing the plaintiff’s claims to go forward in court.

If you or a loved one have been seriously injured in a car accident in New York, ensure that you receive the full compensation you’re owed for your injuries and contact personal injury lawyer Leandros A. Vrionedes for a free consultation on your claims, in Manhattan at 212-889-9362, and in Queens at 718-777-5895.

By Leandros Vrionedes | Posted on May 9, 2016
Skip sidebar and go to footer