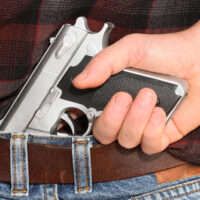 A man who was chased out of a bar and shot on the street sued the man who shot him, as well as the owner of the bar and the landlord/property owner. The court dismissed the injured man’s claims against the bar under theories of dram shop liability and premises liability due to a lack of evidence to support the first theory and an unsound legal basis for the second.

The case was James v. Terrace Tavern, LLC, decided earlier this month in the Supreme Court, Orange County. The shooting occurred in November 21, 2011 outside of the Terrace Tavern in Poughkeepsie. The plaintiff, Donovan James, had opened the door of the tavern and was about to step in when he spied the defendant Robert McKenzie and others inside the bar whom he felt meant to do him harm. James turned and hurried away down the street, but McKenzie followed him out of the bar, chased him down and shot him on Liberty Street.

James’ first argument, and probably his better one, was for liability under General Obligations Law 11-101, commonly known as the Dram Shop Act. This law holds that a person who unlawfully sells alcohol is liable for damages caused when the intoxicated person injures another person. So-called “dram shop liability” could apply to a bar that sells alcohol to a minor or to a person who is already obviously intoxicated, since it is reasonably foreseeable that the youth or drunk person could injure another in a car accident, fight or other negligent or intentional misconduct.

Unfortunately for James, he did not present any evidence to show that McKenzie was intoxicated or even that he had been served any alcohol at all at the Terrace Tavern. He therefore did not establish a sufficient case for dram shop liability to survive the defendants’ motions for summary judgment.

James’ next argument fell under general negligence or premises liability law, claiming that the bar owner and property owner failed in their common law duty to maintain a safe premises. This argument failed for a couple of reasons. First of all, the shooting occurred outside the bar on a public street. Second, James did not present any evidence that the premises were unsafe at the time of the shooting; he did not offer evidence of fighting or dangerous activity, or any calls to law enforcement or medical personnel prior to or unrelated to his being shot. Therefore it cannot be said that the bar owner knew or should have known about the existence of a dangerous condition which should have been remedied.

The court refused to go so far as to require a bar owner to supervise and control the behavior of its patrons, other than to monitor their consumption of alcohol and avoid dram shop liability. Even if bar owners did have this duty, the court said, it wouldn’t extend to a customer’s conduct outside the bar.

Absent any special relationship between the bar owner and the plaintiff or the defendant, there simply was no legal duty for the tavern keeper to regulate the patron’s behavior either in or out of the bar, or to require the owner to take affirmative steps to protect the plaintiff. The owner’s liability would have been limited to a dram shop action, which as mentioned above was dismissed for lack of evidence.