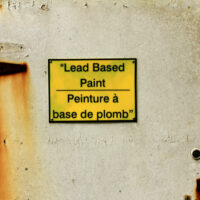 A young man who suffered from learning disabilities believed to be caused by lead paint exposure will now be permitted to pursue his claims at trial. A recent decision by a Supreme Court of New York County judge rejected a motion to dismiss these claims filed by the boy’s one-time landlord.

The case, titled Brown v. Webb-Weber, is based on the claims of a now-20-year-old high school student named Christopher Brown. Brown claims that, while he lived in an apartment owned by defendant Wendy Webb-Weber between July 1998 and July 2003, he was exposed to chipping and peeling lead paint.

As an infant, Brown’s blood tested positive for the presence of lead when he spent several months living in an apartment owned by a man named Steven Thau. However, the amount of lead in his blood (1.0 and 1.3 mcg/dL) had not reached the level considered by the Centers for Disease Control and Prevention to be toxic. While Brown’s mother complained to Thau about peeling paint in the unit, she did not notice her son eating paint chips, nor did she notice any signs of lead poisoning. It was not until years later that Thau learned of the presence of lead paint in the apartment.

Brown’s mother relocated to the apartment owned by Webb-Weber in July of 1998. When the Browns moved in, the unit was not tested for the presence of lead, but an inspection did not uncover any chipped or peeling paint that a child might have put in their mouth. In a blood lead test conducted in October of 1999, Brown was found to have a lead level of 22 mcg/dL after living in Webb-Weber’s unit for 15 months. Two subsequent tests also showed elevated blood lead levels.

After the October 1999 test revealed Christopher’s elevated blood lead level, the Westchester County Department of Health inspected the Browns’ unit. Inspectors found chipped and peeling lead paint, and Brown’s mother reported seeing Brown eating chips of paint. Christopher began treatments for elevated lead levels at this time. Webb-Weber was instructed to submit an abatement plan to the Department of Health within ten days of receiving notice of the presence of lead in her unit, which occurred on October 20, 1999. However, a plan was not submitted until December 3, 1999, and the hazard was not abated until almost a year later, in November of 2000. While the abatement process was ongoing, the Browns were relocated to a hotel from mid-May 2000-November 2000. Brown and his mother had been told originally that the abatement process would take nine days. Since they had not packed for a long-term stay in a hotel, they returned to their apartment on weekends to get clothing and other items that they needed. Webb-Weber sold the building shortly after ameliorating the lead problem.

Christopher filed a claim against Webb-Weber in 2016 for the injuries he suffered as the result of lead exposure, a hazard he claimed that Webb-Weber did not abate within a reasonable amount of time. Webb-Weber filed a motion for summary judgment dismissing Brown’s complaint, arguing in part that Brown had failed to use a toxicologist or other qualified expert to show that Brown experienced a quantity of lead exposure in Webb-Weber’s unit that was generally accepted by the scientific community to cause his symptoms. She argued that this failure to use an expert left open the possibility that exposure was caused by his exposure to lead in the unit owned by Thau, or at Brown’s nearby daycare. Brown responded by arguing that Webb-Weber’s delay of 13 months in abating the lead condition amounted to negligence.

Webb-Weber’s motion for summary judgment was denied. Presiding Judge Erika Edwards pointed out that the differential in the blood lead level between when Brown moved into Webb-Weber’s apartment and the level found after he had lived there for 15 months was sufficient evidence to support Brown’s claim against her. Further, the judge ruled that Brown’s expert had presented sufficient evidence to support Brown’s claim that the lead in Webb-Weber’s unit caused his lead-based injuries. The judge found additional support for the claims that Webb-Weber’s unreasonable delay in abating the hazardous condition caused further harm to Brown. Webb-Weber’s summary judgment motion was dismissed, and the claim was permitted to move forward toward trial.

If you or someone you love has suffered injuries as a result of lead poisoning in New York, find out if you’re a good candidate to file a claim for damages based on your injuries by contacting the knowledgeable and skilled Manhattan personal injury lawyer Leandros A. Vrionedes for a consultation, at 212-889-9362, or in Queens at 718-777-5895.

By Leandros Vrionedes | Posted on November 27, 2017
Skip sidebar and go to footer