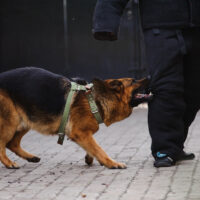 In New York, the owner of a domestic animal is strictly liable for harm caused by that animal, but only if the owner knew or should have known of the animal’s vicious propensities. In the case where a dog bites a person, knowledge of a vicious propensity can be proven if it can be shown that the dog has bitten someone else before, or if the dog tends to growl, snarl or bark in an aggressive manner.

Last month the New York Supreme Court, Kings County, threw out the case of Ciliotta v. Ranieri because the dog bite victim could not prove that the owner had knowledge of the dog’s vicious propensity prior to the bite.

The incident occurred in 2011, when the defendant was walking her dog on a leash with a friend. They stopped on the sidewalk in front of the plaintiff’s house, while the plaintiff was standing in his driveway. The defendant instigated a verbal altercation with the plaintiff, which lasted for about ten minutes. The plaintiff then went to the side of his house to get his garden hose to water the lawn. He admits that the defendant and her dog “may have gotten wet” while he watered his lawn.

The defendant left but shortly returned and threw a bag of dog excrement at the plaintiff. He picked up the bag and chased after her. The plaintiff admits to approaching the defendant and touching her (the facts are in dispute whether he had actually started to choke her), when he got bit by the dog. This litigation followed.

The defendant moved for summary judgment to dismiss the lawsuit on the grounds that the plaintiff could not show that she knew or should have known the dog had any vicious propensities before the attack happened. In support of her motion, she produced her own deposition testimony and affidavits from her parents that the animal was kind and gentle and had never bitten anyone before.

The plaintiff then filed a cross-motion, seeking summary judgment in his favor on the issue of strict liability. In support of his motion and in opposition to the defendant’s motion, he introduced a 2010 report of the New York City Department of Health and Mental Hygiene that showed the defendant’s dog had in fact bitten someone the year before.

The judge granted the defendant’s motion and denied the plaintiff’s. In her ruling, the judge held that the report offered by the plaintiff was not certified or authenticated for truth or accuracy, and that it failed to provide sufficient information regarding the previous incident to be good evidence. The judge also apparently believed the defendant when she said that the incident in the report related to a different dog she had owned previously and which has since passed away. Finally, the judge observed that the dog bite occurred because of the plaintiff’s physical proximity and manner toward the defendant, and that the dog acted defensively as one would expect of any canine companion, and not as a result of unprovoked aggression.

Perhaps if the substance of the report submitted by the defendant had been more extensive, or if it had been submitted to the court in a stronger fashion, it would have raised enough of a question of fact to survive a motion for summary judgment and send the case to a jury trial. This case serves as another example of the crucial role pre-trial motions can play in the outcome of a personal injury case for either the plaintiff or the defendant.