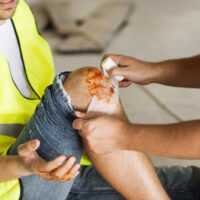 Last month, the City of New York released the Mayor’s Management Report for Fiscal Year 2015, an annual report to NYC residents about how well the city is doing across the full range of city services. Every area and city department is included in the report, including the Department of Buildings, the agency responsible for enforcing the City’s building code, electrical code, New York State Labor Law, and more. The Buildings Department takes up only six pages of the Mayor’s 346-page report, but what those pages show is not good news for construction safety in New York City.

Goal 2c of the Buildings Department, which can be found on page 256 of the report, is to “prevent construction-related fatalities and injuries.” A laudable goal, but the Department has a tough row to hoe, as the report’s own statistics demonstrate.

Here is a snapshot of statistics from the report, comparing FY 2015 to the previous year:

Why so many NYC construction accidents?

By Leandros Vrionedes | Posted on October 7, 2015
Skip sidebar and go to footer