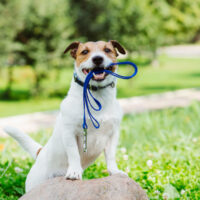 On April 16, the Appellate Division of the New York Supreme Court held that the trial court in the case of Doerr V. Goldsmith  should have dismissed the plaintiff’s personal injury complaint as a matter of law, rejecting the plaintiff’s common law negligence claim in favor of strict liability and New York’s “one free bite rule.”

In New York, an owner is not liable (beyond medical damages) if its animal bites or attacks a person unless the owner already knew or had reason to know of the animal’s vicious propensities. This is not an unusual law. Many states have adopted this “one free bite” rule, while other states impose strict liability on the owner from the very first bite.

What is unusual about the application of the “one free bite” rule to this case is that it did not involve a bite or an attack of any sort. The plaintiff was riding his bicycle through Central Park as he approached a couple standing on either side of the road. The boyfriend was holding the dog on one side of the road, while the girlfriend on the other side was beckoning the dog to cross. Despite the plaintiff’s warning to “Watch your dog!”, the boyfriend released the dog who then ran across the road in response to the girlfriend’s call. Plaintiff was unable to avoid colliding with the dog and suffered injuries when the collision propelled him off of the bike.

The New York court held that since there was no evidence that the dog’s owner had any knowledge that her dog had “a propensity to interfere with traffic,” she should have had the case dismissed in her favor.

Unfortunately, this case is not an anomaly in Supreme Court of New York. To the contrary, it is only the latest in a string of recent cases in which the court refused to hold animal owners liable for injuries caused by an animal through the owner’s negligence that had nothing to do with any type of attack or bite. As pointed out by the dissenting opinion in this case, in 2007 the court refused to hold the owner liable when a person on a ladder was knocked down by a horse (Lista v. Newton); a claim was dismissed in 2010 when a person became entangled in the chain of a dog that was running around (Egon v. Hom); and in 2012 there was no liability owed to a driver who was injured when her car struck a cow that had wandered off the farm and onto the highway (Hastings v. Suave). The court rejected liability in all of these cases because the owner had no prior knowledge of a “vicious or abnormal propensity” in the animal.

The dissenting judge also gave an example of two people tossing a ball back and forth across a road. If a cyclist got hit in the head as he rode by because the people playing catch were negligent in their game, they could be held liable. That situation seems more analogous to what happened here than any case where an animal physically attacked another person.

New York City attorney Leandros Vrionedes helps victims of all types of injuries that involve the negligent, reckless or intentional misconduct of another. If you have been injured and believe that another party is responsible for your injuries, contact Leandros A. Vrionedes, P.C. for a free consultation regarding your right to receive compensation under the law.

And no, there was no mention in the court’s decision about whether or not the dog was harmed in the incident.