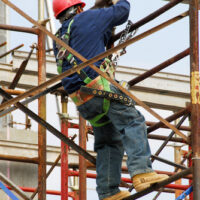 In 2010, a worker who was hired to clean the walls and window ledges at the Worldwide Plaza subway station in New York City fell 20 feet to the floor when the ladder he was standing on kicked out from under him while he was hosing down a wall. The injured worker sued the owner of the building under Labor Law section 240(1), and the court last month ruled in favor of the worker on his liability claim.

New York Labor Law section 240(1), commonly known as the scaffold law, requires contractors and owners to furnish or erect scaffolding, hoists, stays, ladders, slings or other devices to give proper protection to a worker engaged in erection, demolition, repairing, altering, painting, cleaning or pointing a building or other structure. A building owner or contractor who violates this statute is absolutely liable for injuries that result from a “gravity-related” or “elevation differential” accident caused by the violation.

The defendant’s only argument to the Supreme Court, New York County, in Declercq v. WWP Office, LLC was that the plaintiff was engaged in routine cleaning when the accident occurred and was not working on any type of construction or renovation project, so Labor Law 240(1) should not apply. It is true that routine maintenance is not covered under 240(1), and that issue has been addressed before in this blog (see Ladder Fall is a Covered Injury During Repair, But Not Routine Maintenance). But the activity there involved replacement of ceiling tiles. Here, the plaintiff was cleaning, which is one of the seven covered activities specifically enumerated in section 240(1).

In the end, the court decided that since the cleaning activity was not routine household or domestic cleaning, it was not routine maintenance. For the court, it is not so important whether or not the cleaning is part of a construction project, but whether the task creates an elevation-related risk within the meaning of 240(1). The judge granted summary judgment in favor of the plaintiff on the issue of liability and sent the matter to trial to determine the amount of damages to be owed.