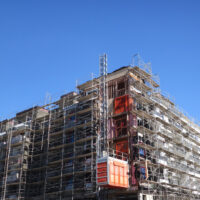 In a recent case before the Third Department of the New York Appellate Division, the court granted an injured worker’s motion seeking to hold an employer liable for injuries he received after a scaffold collapse, even though the worker was involved in the construction of the scaffolding.

The plaintiff in this case, David Griffin, and his coworker, Patrick Gerrard, were both injured on a job constructing a masonry elevator shaft. The scaffolding on which the men were working collapsed, causing them to fall over 40 feet down the elevator shaft. Griffin sued the general contractors, Varish Construction, as well as the property owner, AVA Realty Ithaca, and the masonry subcontractor, Aspen General Contractors. His claim for damages included a claim under New York’s scaffold law, Labor Law §240 (1).

Injured worker files a motion for summary judgment on liability

Griffin filed a motion for partial summary judgment, requesting that the court find the defendants liable under §240 (1) prior to trial. The defendants argued that they should not be held liable for Griffin’s injuries for two main reasons. First, they argued that, since Griffin was an independent contractor, §240 (1) didn’t apply. Second, they argued that Griffin was the sole proximate cause of his own injuries. The court dismissed the argument that independent contractors aren’t owed a duty of safe work conditions. However, the trial court agreed with the defendant that there were questions regarding whether Griffin was the sole cause of his injuries, and denied the motion for summary judgment. Griffin appealed.

Defendants claim worker the only cause of his injuries

Section 240 (1) offers broad protection for workers who are injured while working at a height, or who fall into a trench or shaft on the worksite. There are very few occasions where a court will consider the injured employee’s acts prior to the accident when deciding whether they are entitled to money damages from the employer. However, workers won’t be entitled to damages under §240 (1) where the worker is determined to be the “sole proximate cause” of their injuries. This rule applies, the Appellate Division explained, where a worker “had adequate safety devices available; that he or she knew both that they were available and that he or she was expected to use them; that he or she chose for no good reason not to do so; and that had he or she not made that choice he or she would not have been injured.”

Duties to provide safe condition under the law and contract

In this case, after the accident an OSHA site inspector found that the scaffolding lacked base plates which would have prevented it from collapsing, as well as other safety precautions such as a guardrail system and personal fall arrest system that would have prevented Griffin’s injuries. The defendants argued that Griffin had helped reconstruct the scaffolding when it was moved from a lower floor to its location at the time of the collapse, and that he wasn’t supervised in using the scaffolding or on safety issues relevant to constructing the scaffolding, making him the sole proximate cause of his injuries. Griffin provided a contract between himself and the defendants which made the subcontractor responsible for supplying “proper safety equipment and for the enforcement of OSHA safety regulations.”

The Appellate Division ruled that the defendants had failed to uphold their duties under both the law and their contract, and granted Griffin’s motion for summary judgment under §240 (1). The opinion explained that §240 (1) places “ultimate responsibility for safety practices at building construction jobs where such responsibility actually belongs, on the owner and general contractor.” The Appellate Division ruled that the breaches of duty were the cause of the worker’s injuries, even if Griffin was partially responsible for the scaffold collapse.

If you’ve been injured on the job in New York and need assistance getting the money damages you believe you deserve for those injuries, contact the aggressive and effective Manhattan workplace injury lawyer Leandros A. Vrionedes for a consultation on your case, at 212-889-932, or in Queens at 718-777-5895.

By Leandros Vrionedes | Posted on May 29, 2017
Skip sidebar and go to footer