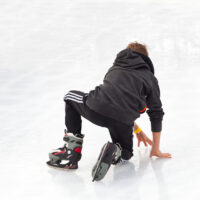 The Appellate Division of the New York Supreme Court recently affirmed a trial court’s ruling dismissing a personal injury case brought by a student against a teammate, his coach and his high school for an injury he suffered in the locker room after hockey practice. The court’s March 20 ruling in Litz v. Clinton Central School District agreed with the lower court that the plaintiff had “assumed the risk” of being injured by agreeing to participate in the sport and therefore could not hold the school district liable for his injury.

The accident occurred in the locker room after hockey practice at a local municipal athletic and recreational facility. The plaintiff was heading toward the showers barefoot when another teammate, who still had his ice skates on, stepped backwards and stepped on the plaintiff’s bare foot. In granting the defendants’ motions for summary judgment in their favor, the court found that the risk of this injury was a risk associated with the sport of hockey, and the plaintiff had assumed that risk.

The legal doctrine known as Assumption of the Risk applies to sporting or entertainment activities in the following circumstances:

Voluntarily participating in a sport implies consent to an injury which is known, apparent or reasonably foreseeable by the plaintiff, based on his or her skill and experience as a player. In this case, the plaintiff had been playing hockey for more than a decade and testified that he knew people wore their skates into the locker room and that he needed to be careful around them.

It was also held by the court that changing out of your uniform after practice still counts as being involved with or participating in sport for the purposes of the assumption of the risk doctrine. Had the plaintiff been less experienced, or had the injury been one which was not reasonably foreseeable, the ruling may have gone differently.