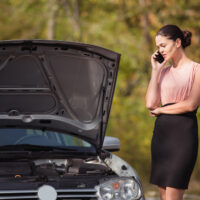 Even when a dangerous defect in a driver’s vehicle isn’t their fault, drivers may still be financially liable for harm resulting from that defect if they don’t drive their defective vehicle responsibly. A recent decision by the Fourth Department of the New York Appellate Division allowed a claim against a driver of a defectively-repaired car to move forward toward trial.

Plaintiff injured when wheel flies off vehicle traveling in opposite direction

The recently-decided case was titled Michael v. Wagner. The injured plaintiff, Christine Michael, was driving north on I-190 in Buffalo at the time of the accident. As she was driving, her vehicle was struck by a wheel that became detached from a car being driven by the defendant, Gina Wagner, as she drove south on I-190. Michael was injured in the collision and filed a lawsuit against both Wagner and her auto mechanic, Lakeshore Tire & Auto. The mechanic conceded liability to Michael. Wagner, however, filed a motion for summary judgment, arguing that there was no legal basis to find her negligent and that her conduct did not cause the accident. The trial court denied her motion, and she appealed.

Driver has a duty to ensure that vehicle is safe

In its opinion, the Appellate Division explained a driver’s responsibility to ensure that their vehicle is not a danger to others. The opinion explained, “An owner and operator of a vehicle has a duty to inspect his or her vehicle and to discover and rectify any equipment defects.” Once a driver becomes aware that their vehicle is not functioning normally, the Appellate Division explained, the driver has a legal obligation to stop their car to prevent others on the road from becoming injured by the vehicle breaking down in the road.

In this case, Wagner testified that, as she drove on the day of the accident, she could tell that “something was wrong with her car.” Nevertheless, she kept driving without pulling over and inspecting her vehicle for defects that could be causing its unusual behavior. The Appellate Division concluded that Michael was entitled to pursue a claim against Wagner for failing to ensure that her car was safe before continuing to drive.

If you’ve been injured in a New York traffic accident involving a dangerous vehicle or negligent repairs, find out if you should file a claim for money damages by contacting the dedicated and effective Manhattan personal injury lawyer Leandros A. Vrionedes for a consultation, at 212-889-9362, or in Queens at 718-777-5895.

By Leandros Vrionedes | Posted on June 12, 2017
Skip sidebar and go to footer