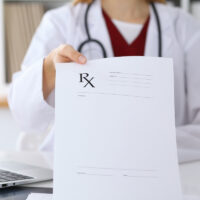 A decision from the New York Court of Appeals concluded that a doctor has a duty to notify a patient that the prescribed medication can jeopardize that patient’s ability to drive safely, making the doctor liable if a patient without that notice injures someone else while driving.

In the case of Davis v. South Nassau Communities Hospital, a woman named Lorraine Walsh drove herself to the defendant hospital, seeking treatment for severe internal pain. Her treating physicians provided her with an opioid pain killer and benzodiazepine drug, both of which can impair a patient’s ability to drive. Walsh was not advised of the dangers of driving while these drugs were in her system. She was released from the hospital within about an hour and a half of being admitted, and proceeded to drive herself home. While doing so, she veered into oncoming traffic, hitting a bus and injuring its driver, Edwin Davis. Davis noticed that Walsh seemed impaired at the time of the crash. He subsequently filed a lawsuit against the hospital for his injuries, which he claimed stemmed from Walsh’s doctors failing to tell her that she could not safely drive her car after taking the medication she had taken. While the hospital had successfully moved to dismiss the plaintiff bus driver’s claim in the lower court, the plaintiff appealed, and won. New York’s highest court agreed that the hospital “owed [Davis] a duty to warn Walsh that the medication defendants administered to Walsh impaired her ability to safely operate a motor vehicle.”

The court described its hesitation to hold the doctor responsible to someone he’d never met, for an accident he wasn’t in. Generally, someone who is not a part of the accident does not have as good an opportunity to intervene and prevent the accident, and often isn’t as responsible as the actual tortfeasor (a person whose behavior directly resulted in injury to someone else). However, responsibility for an injury will be extended to third parties when warranted. The court’s opinion stated that, when someone is injured in an accident, the party that should be held responsible is the party that could have most effectively and inexpensively acted to prevent the harm that occurred. For example, when an accident occurs because a distracted driver tried to send a text while driving and didn’t notice that a light had turned red, then the person who could have most cheaply and effectively prevented that harm was the distracted driver and not, say, the cell phone’s manufacturer. However, if a car was incorrectly repaired so that one of the car’s wheels became loose and uncontrollable by the driver, causing the car to veer into oncoming traffic, then the only party with the ability to effectively and inexpensively prevent that harm—in fact, the only party who had the power to prevent that harm– would have been the mechanic who had conducted those repairs. The courts explained how the doctor in this case was, similar to the mechanic in the prior example, the party with the greatest power to prevent the harm. “[T]o take the affirmative step of administering the medication at issue without warning Walsh about the disorienting effect of those drugs was to create a peril affecting every motorist in Walsh’s vicinity. Defendants are the only ones who could have provided a proper warning of the effects of that medication.”

If you have been injured as a result of another person’s negligent behavior, contact the skilled and aggressive New York City personal injury attorney Leandros A. Vrionedes for a consultation on your claims, at 212-889-9362.

By Leandros Vrionedes | Posted on January 20, 2016
Skip sidebar and go to footer