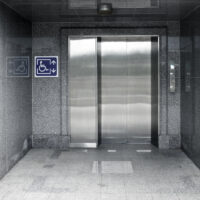 A claim recently before the Supreme Court of Westchester County forced the court to determine whether a man injured while escaping from a stopped elevator acted reasonably by getting out of the elevator instead of waiting for help to arrive. Read on to learn about the case of Senior v. Elevator Refurbishing Corp., and contact a knowledgeable New York personal injury attorney if you’ve been injured in an elevator accident.

The plaintiff, Fenton Senior, was riding in his building’s elevator around midnight when the accident occurred. The elevator functioned normally at first but then stopped abruptly between the first and second floor. Senior became nervous and began “fidgeting with the buttons.” The elevator then began to descend quickly, stopped, and shook. The door of the elevator opened between floors, and Senior decided he should get out of the troubled elevator as quickly as possible.

While escaping the elevator, he hit his head on a stone divider after his feet made contact with the floor of the lobby. Senior couldn’t recall whether he hit an emergency button while fumbling with the elevator’s buttons, and he stated in a deposition that he did not call the building’s superintendent or 911 while in the elevator. Senior filed a claim against the building and the elevator maintenance company for the injuries he suffered while exiting the malfunctioning elevator. In response, the defendants filed a motion to dismiss Senior’s injury claim, arguing that his response to the elevator stopping was the superseding intervening act of his injuries, not the condition of the elevator.

Motion to dismiss lawsuit based on a superseding intervening act

When an injury victim files a lawsuit against the party they claim to have caused their injuries, the court will require them to prove not only that the defendant somehow acted wrongly to create a dangerous condition, but also that the dangerous condition was the actual cause of the victim’s injuries. The term “superseding intervening act” is used to describe an act or event that occurred after the plaintiff encountered the alleged dangerous condition, but before they were injured, that was the true cause of the injuries rather than the defendant’s negligence. The act must not be foreseeable or a reasonable response to the hazard created by the defendant.

In this case, the defendants argued that Senior had testified to having trouble with the elevator in the past, but that he hadn’t been injured on those instances. They argued that there was no emergency that would have justified Senior’s panicked exit from the elevator, making it impossible for the defendants to foresee that he would scramble out of the open door and injure himself in the process.

The court disagreed and rejected the defendants’ attempt to dismiss the case. The judge’s opinion explained that, after the elevator’s abrupt descent and sudden stops, Senior was justifiably frightened of what might happen next. The judge explained that there was no way that Senior could have known that he wasn’t in danger of a worse accident involving the elevator, and that he escaped when he thought it was safe. The judge explained that a jury would still need to determine whether Senior’s response was reasonable and would justify holding the defendants liable for costs related to his injuries; the case will now move forward toward trial.

If you or someone you love has been injured in a New York elevator accident, contact the knowledgeable and experienced Manhattan personal injury lawyer Leandros A. Vrionedes for a free consultation on your case at 212-889-9362, or in Queens at 718-777-5895.

By Leandros Vrionedes | Posted on June 4, 2018
Skip sidebar and go to footer