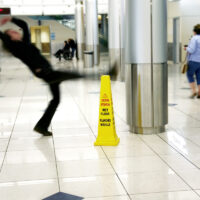 During the winter, those of us living in snowy climates can expect there to be melted snow and ice tracked into slippery lobbies and doorways. However, once inside a building or train station, we aren’t always prepared to find puddles of standing water on slippery concrete floors, and can pay the price of an injurious fall. One New York City judge has found that property owners are still required to remain vigilant in keeping their premises free from slippery hazards, even during wet winter months. In a case before the New York Supreme Court, where the Metropolitan Transportation Authority attempted to dismiss a fall victim’s claims, arguing that it couldn’t be held responsible for puddles formed during a snowstorm, the court determined that the woman has a right to continue pursuing the claims.

The facts of the case, titled Rodriguez v. New York City Transit Authority [NYCTA] and Metropolitan Transportation Authority [MTA], are simple: a woman slipped and fell on a wet underground subway platform five feet away from a stairway, became injured, and brought a claim against the transportation authorities for their negligence in failing to clean up the hazardous water. The defendants attempted to have the claims dismissed on a summary judgment motion, arguing that two legal bases applied: the “Storm in Progress” doctrine, and a lack of notice of the water.

In order to have a claim dismissed on summary judgment, a defendant will try to prove that, based on basic evidence of the facts surrounding the case that the court has been given to consider, being examined in a way that looks as favorably as possible on the plaintiff’s evidence, there is no major factual dispute left to be resolved before the court can determine which party should win. Summary judgment is a way of more quickly eliminating a claim that would inevitably lose at trial, saving the court’s and the parties’ resources.

The defendants first argued that the “storm in progress” doctrine applied on the day the plaintiff was hurt, which absolved the defendants of liability. Under that doctrine, owners of property where someone falls and is injured won’t be held liable for those injuries while a storm is in progress, since there would be no way to completely eliminate all hazardous effects of an ongoing storm. Defendants argued that the plaintiff fell near a staircase that led to the outdoors and was exposed to the elements, that a storm was ongoing when the fall occurred, and that there would be no way to continuously keep other riders from tracking in melted snow during the storm. The plaintiff successfully responded to these arguments with meteorological data showing that the snow had stopped hours before, that only an inch and a half of snow had fallen during this storm, and that the location of her fall was indoors, not in an area exposed to the elements.

The court also rejected the second major argument that the defendants put forward, that they had no notice of the water, despite having regularly inspected the area where the accident occurred. Specifically, they asserted that the MTA employee tasked with cleaning the station that evening had checked the staircases for water immediately before the plaintiff fell, as shown by an incident report completed after the accident occurred. The court pointed out, however, that the report states that the incident occurred at 6:59 pm, while the inspection occurred at 7:00 pm, and that the inspecting employee nevertheless did not witness the fall and had to be called from elsewhere in the station. The court concluded that whether or not the defendants upheld their duty to regularly inspect the station for hazards, and whether the stairs had been inspected before the plaintiff’s accident, were still factually disputed, which made the summary judgment motion fail.

If you or a loved one has been injured by a slip and fall on a business owner’s property and need help in seeking compensation for your expenses, contact the skilled New York City slip and fall personal injury attorney Leandros A. Vrionedes for a consultation on your claims.

By Leandros Vrionedes | Posted on January 12, 2016
Skip sidebar and go to footer