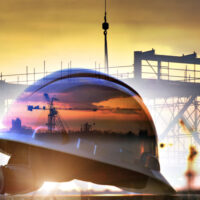 Two injured workers have succeeded in a motion for partial summary judgment for injuries they suffered after falling through a floor while working on a Manhattan construction project. The Kings County judge overseeing the case also denied a motion by defendants to dismiss the injured plaintiffs’ claims, in the case titled Leon v. East Harlem Council for Human Services, Inc.

The plaintiffs, Luis Leon and John Telmo Rodriguez Curipoma, were employees of Elite Demolitions. Westerman Construction hired Elite to demolish a portion of a building owned by East Harlem Council. The two plaintiffs had been working on the site for which Westerman was the general contractor only briefly when they both fell through the floor on which they were standing. The men fell 11 feet to the building’s basement and were badly injured.

The injured men filed a lawsuit against East Harlem Council and Westerman Construction, seeking damages for their injuries under Labor Law § 240 (1) and § 200. In the context of their lawsuit, the men filed motions for partial summary judgment, seeking to have the judge determine that the defendants were liable for their injuries. The accident victims argued that demolition is explicitly listed in § 240 (1) as a protected form of work, which is the type of work they were performing at the time of their accident. The plaintiffs argued that they were standing on an impermanent platform, rather than a permanent floor, making it equivalent to standing on scaffolding that held them above a multi-story drop. The men argued that, since the platform on which they stood was the only safety device provided to them to prevent them from falling, and since it failed, defendants should be held liable under § 240 (1) for failing to provide the men with the safety protections that they needed to prevent their injuries.

The judge ruled in favor of the injured plaintiffs, holding the defendants liable under § 240 (1). The judge noted in his opinion that the purpose of § 240 (1) is to protect workers from “an injury that directly flows from the application of the force of gravity to an object or to the injured worker performing a protected task.” Thus, workers injured by a fall while performing demolition are covered by § 240 (1). The judge also wrote that § 240 (1) makes owners and general contractors responsible for violations under that law, regardless of fault or whether they were supervising the worker at the time of the accident. The judge concluded that, whether the floor was permanent or impermanent, the floor’s collapse resulted in a violation of §240 (1). If the floor was in fact a temporary platform, then the defendants would be liable just as they would have been if the men had been working on scaffolding erected far above the ground. If the floor was, in fact, permanent, there would need to be evidence that the floor’s collapse was predictable to prove that the defendants should have provided additional safety equipment under § 240 (1). In this case, there was testimony from an employee of Elite Demolition that he had told the defendants that the floor was unsafe and needed additional fortification. Since the defendants didn’t provide safety equipment to the plaintiffs and the plaintiffs were injured in a fall, the defendants were held liable for their injuries under § 240 (1). The plaintiffs’ lawsuit will now move forward for a determination of what the defendants must pay the plaintiffs for their injuries.

If you’ve been hurt in a construction accident in Manhattan, find out if you’re entitled to money damages for your injuries by contacting the seasoned and professional Manhattan construction injury lawyer Leandros A. Vrionedes at 212-889-9362, or in Queens at 718-777-5895.

By Leandros Vrionedes | Posted on February 27, 2018
Skip sidebar and go to footer