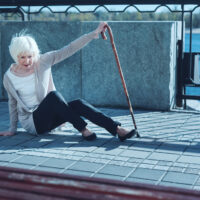 The case before the Supreme Court of Queens County was Medina v. City of New York, and was based on claims by a woman suffering injuries from a fall on the sidewalk. Medina was walking in front of the Young Men’s Christian Association of Greater New York (YMCA) in November of 2012 when she encountered a raised portion of sidewalk and a dead tree earlier felled by Superstorm Sandy. Medina tripped and fell, incurring serious injuries. Medina filed a lawsuit against the YMCA as well as the City of New York and the city’s Department of Transportation. The claims against the Department of Transportation were dismissed for procedural reasons. During an interview of the plaintiff conducted prior to trial, she testified that the raised section of sidewalk was “not that big,” estimating it to be “half an inch high.” Employees of the City and of the YMCA testified that the YMCA had received a citation from the City several months before Medina’s fall for a trip hazard/broken sidewalk violation, and that the sidewalk was repaired before Medina’s fall.

The YMCA and City moved for Medina’s claims to be dismissed via a summary judgment motion. The defendants argued that the condition presented by the sidewalk was not unsafe. Medina responded to this argument with photographs from the scene of the accident, as well as her own affidavit regarding the dangerous section of sidewalk.

The court noted that summary judgment is a “drastic remedy” and is not an option for parties unless there is truly no way to find that the plaintiff has a genuine claim for damages, and that there are disputed facts which a jury should be permitted to decide. The court stated that, in order for a defendant in a slip-and-fall case to be found liable, the plaintiff must show that the defendant created the dangerous condition that caused the plaintiff’s injury, that the defendant knew about the condition (called “actual notice”), or that the defendant should have known about the condition (called “constructive notice”). The court wrote that a property owner will be found to have had constructive notice of a condition where a defect is “visible and apparent and exist[s] for a sufficient period of time prior to the accident to permit defendant to discover and remedy it.”

The court denied the defendants’ motion for summary judgment, finding enough of a factual dispute present to warrant decision by a jury. The court pointed out that, in the state of New York, photographs of the site of an injured plaintiff’s accident are enough to create a question of fact on whether the property owner had constructive notice of the dangerous condition, such that the jury should be permitted to examine the evidence and decide if notice existed. The court also pointed out that, generally, where there is a debate as to whether a dangerous condition existed when a person was injured will depend on the unique facts of each case, and should be submitted to a jury. Medina’s claims will now be permitted to progress toward trial.

If you have been injured in a slip-and-fall in New York City and are seeking legal help getting the money you need for your medical expenses and pain and suffering, contact the compassionate, determined, and trial-ready New York personal injury attorney Leandros A. Vrionedes for a consultation on your case, in Manhattan at 212-889-9362, or in Queens at 718-777-5895.

By Leandros Vrionedes | Posted on April 15, 2016
Skip sidebar and go to footer