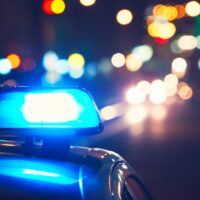 An NYPD patrol car crashed into another NYPD patrol car while officers in both vehicles were responding to an emergency call. The driver of the car that was hit sued the other driver and the City of New York for the injuries he sustained in the accident. The courts threw out the case, however, because the police officer’s driving – which included driving the wrong way down a one-way street – was “mere negligence” and not reckless enough to make him liable for his actions.

The car accident occurred on the night of September 20, 2006. Two officers were patrolling in Central Park when they heard an urgent radio call from a fellow officer who was pursuing a man with a gun on foot near a public housing development a few blocks away. The officers in the patrol car decided to join the pursuit, although the call came from outside their precinct. Apparently with lights and sirens activated, they drove northbound on Columbus Avenue against the legal flow of traffic and made a left turn on West 104th Street, heading eastbound on a westbound one-way street.

Officer Frezzell, the plaintiff in this case, was also responding to the same call and was driving westbound on 104th street when he collided with the defendant’s patrol car. Both drivers had attempted to avoid a collision but did not have enough time to react. Frezzell sued under General Municipal Law 205-e, which gives police officers the right to sue for any injury caused by neglect or negligence of others in failing to comply with the law.

The law alleged to be violated was Vehicle and Traffic Law 1104. This law allows emergency vehicles to violate traffic laws when responding to emergencies. For instance, emergency vehicles may legally speed and ignore stop signs and red lights. In addition, section 1104(b)(4) specifically allows emergency vehicles to disregard regulations governing directions of movement or turning in specified directions. However, this law also specifically says that it does not relieve the driver of the duty to drive with due regard for the safety of all persons. The law expressly does not protect the driver from the consequences of reckless disregard for the safety of others.

The Supreme Court, New York County, granted the defendant’s motion for summary judgment and dismissed the case. The judge noted that the defendant was only driving about 15 to 20 miles per hour at the time of the crash and had attempted to avoid the collision. According to the judge, this behavior amounted to “mere negligence” and not the “reckless disregard for safety” required to be liable under section 1104. The Appellate Division of the Supreme Court affirmed the decision of the trial court, although two justices dissented because they felt a trial should be held to decide whether the officer was reckless. Nevertheless, on November 20, the Court of Appeals of New York in Frezzell v. NYC affirmed the dismissal of the case.