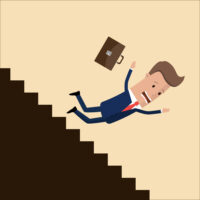 The First Department of the New York Appellate Division (Manhattan and the Bronx) recently issued an opinion on a slip-and-fall claim in a Washington Heights apartment building. The appellate panel allowed a claim against the building’s owners to move forward to trial, despite problems with evidence caused in part by the defendants.

The case, titled Haibi v. 790 Riverside Drive Owners, Inc., arose out of an accident on a dimly-lit staircase. Erasmo Haibi, the accident victim, slipped and fell while climbing the stairs, hitting his head on the marble staircase. The elderly victim died of causes unrelated to his accident before he could testify in a deposition on his slip-and-fall claim. A security camera captured Erasmo’s fall. Both the building manager and Erasmo’s granddaughter, Danette (who lived with him), watched the video. Danette requested a copy of the video after watching it, and attorneys for the Haibi family later requested a copy in writing. Nevertheless, the video was destroyed.

Claim for damages based on inadequate lighting of stairs

Erasmo’s son Roberto Haibi filed a claim as the administrator of his father’s estate, seeking damages for his father’s injuries in the fall. In the lawsuit, Haibi claimed that the building’s management had been negligent in safely maintaining the staircase. Namely, Haibi claimed that the staircase was inadequately lit, causing his father to miss the step when he couldn’t see it. Haibi presented evidence from an expert who assessed the light illuminating the stairs using an objective measurement. The expert found the amount of light to be inadequate, based on the requirements of the building code. Haibi also included Danette’s description of the accident video as support for the claim, as well as his own testimony describing conversations he had with his father about the accident.

The defendant property owners and managers filed a motion for summary judgment to dismiss the lawsuit. The defendants presented the testimony of a neighbor who witnessed the accident and claimed that Erasmo’s fall was the result of him failing to watch where he stepped, not the poor lighting. They also argued that there was no proof that inadequate lighting was the cause of Erasmo’s fall, and that the video (as described in testimony by the property manager) doesn’t prove that the lighting was inadequate to prevent a fall.

Adverse inference when evidence is destroyed

This accident claim had two major evidentiary problems. Since the victim died before he could be deposed, that meant that the court was forced to rely on his son’s memories of conversations they had about the accident rather than a recorded statement. Since the video tape of the accident was also destroyed, the parties relied on the neighbor’s description of the accident, the surveillance video viewers’ memories of that video, photos of the accident site, and expert testimony on the adequacy of the lighting.

Even if the death of Erasmo Haibi was not due to any fault of the defendant building owners or managers, the destruction of the accident video was. Parties to a lawsuit have a duty to preserve documents, recordings, or other items that seem likely to be requested as evidence in a trial. When parties destroy evidence relevant to the opposition’s case, the court may instruct the jury to apply an adverse inference to the destroyed evidence. This essentially means that the jury should assume that the destroyed evidence would have been bad for the side that destroyed it. Since the trial court had ruled that an adverse inference should apply to the video of the accident, and the building expert had presented evidence that the lighting was inadequate, the Appellate Division ruled that there was enough evidence to support the claim and denied the defendants’ motion for summary judgment.

If you’ve been injured in a New York slip-and-fall accident, find out if you’re owed money damages for your medical expenses, lost wages, and pain and suffering by contacting the knowledgeable and dedicated Manhattan personal injury lawyer Leandros A. Vrionedes for a consultation, at 212-889-9362, or in Queens at 718-777-5895.

By Leandros Vrionedes | Posted on December 22, 2017
Skip sidebar and go to footer