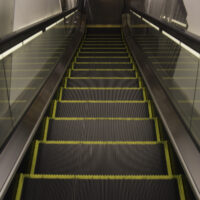 A lawsuit based on a terrifying escalator accident will now move forward toward trial, after an attempt by the property owner and escalator maintenance company to dismiss the claim with a motion for summary judgment. The Supreme Court of Queens County recently issued its opinion dismissing the motion in the case of Ramirez v. Northern Blvd. 4818 LLC.

The lawsuit stemmed from an accident at the Shops on Northern in Long Island City. The plaintiff, Cleotilde Juarez Ramirez, was at the mall with her husband, Alejandro Amador Perez, four-year-old son, and one-year-old son to visit the Chuck E. Cheese restaurant on the mall’s second floor. The family pushed the button for the elevator, but after waiting between two and six minutes for the car to come (the parents’ memories differed on this point), the family decided to take the escalator. A witness later described a sign at the base of the escalator that warned users not to take strollers on the escalator, using text in English and a pictogram.

Immediately after the accident, Perez took photos of the escalator at the point where Ramirez was injured. The photos depicted a broken piece of metal with duct tape around it jutting out from the escalator, the piece that Ramirez contended had hit her in the shin and caused her to fall. Ramirez filed a personal injury lawsuit against the property managers, building lessors, and escalator maintenance company based on her injuries, claiming negligent maintenance of the escalator and a failure to warn of the hazardous condition on the escalator.

The defendants filed a summary judgment motion to dismiss the lawsuit, claiming, among other things, that despite conducting regular maintenance on and inspections of the escalator, they had no warning of the hazardous condition on the escalator, and thus no duty to warn Ramirez.

To support their argument that there was no basis for Ramirez’s claim, the defendants presented evidence from employees who had inspected the escalator prior to the accident. An employee from the escalator maintenance company testified that he had inspected and repaired the escalator roughly a month before the accident, but not the part that had caused Ramirez’s injuries. That employee was also called out after the accident to inspect the escalator, and saw that the broken metal was covered in duct tape. He explained that he had noticed the duct-taped portion of the escalator in the past and wondered whether the tape was holding the escalator together. He found that all the screws were intact near the duct tape, and found no other damage or loose parts nearby. He started to peel it back, but felt that the building’s owner would complain about the sticky residue left by duct tape that had been removed, so he put it back. A maintenance worker at the mall testified that he had ridden the escalator about 15 times on the day of the accident, and had no problems with the machine. He had never received any complaints about the escalator, and saw no pieces of metal sticking out of it.

In opposition to the motion, Ramirez presented evidence from an expert who had inspected the escalator and the records surrounding its inspection by the city. The expert asserted that Ramirez had done nothing to cause the escalator to fail. He pointed out that a piece of metal on an escalator will not become loose without some negligence in its operation or maintenance, and that there was no way to find out whether all screws were intact underneath the duct tape without fully removing it, which never occurred. He also noted that the duct tape must have been installed since the date of the escalator’s last city inspection, since no inspector would have passed an escalator with a repair made with duct tape.

Under New York law, a property owner who invites customers or guests onto their property must ensure that their property is safe and free of hazards. Property owners who know about dangerous conditions on their property (known as having “actual notice”), or would have known about these conditions had they conducted inspections of their property reasonably often (known as having “constructive notice”), but fail to repair these hazards or warn visitors about them, may be liable for any injuries suffered by their visitors. That said, if a property owner has taken reasonable steps to inspect and maintain their property, and a visitor is nevertheless injured by a hazardous condition of which the owners had no warning, the owner may be free from liability for those injuries. Property owners who successfully avoid liability often do so by providing evidence of inspections of the site of the injury that occurred immediately before an accident.

Defendants were able to present evidence that the escalator had been subject to regular maintenance. However, they were unable to present evidence that the maintenance wasn’t negligent. The judge noted in his opinion that the maintenance company had long known about the duct tape covering the piece of metal that ultimately injured Ramirez, but did not inquire as to its purpose, or attempt to find out why it was there by fully removing the tape. On this basis, the judge found it reasonable that a future jury might conclude that the duct tape provided the building’s management with constructive notice of a hazardous condition.

If you’ve been injured in a New York escalator accident and need help getting money damages to cover the costs of your injuries, get a free consultation on your case by contacting the effective and knowledgeable Manhattan personal injury lawyer Leandros A. Vrionedes for a free consultation at 212-889-9362, or in Queens at 718-777-5895.

By Leandros Vrionedes | Posted on November 29, 2017
Skip sidebar and go to footer