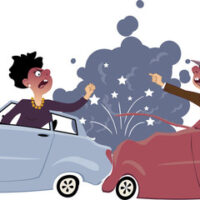 Rear-end crashes in New York are presumed to be the fault of the rear driver. By that same logic, when a New York crash involves three cars, the rear-most driver is assumed to be responsible for the chain-reaction crash. That said, courts will not ignore evidence that a front or middle car involved in a rear-end crash bore some responsibility for a multi-car collision. A Bronx County judge recently issued a ruling in a case where the middle car in a three-car pileup sought to have the claim against him dismissed. Read on to learn more about the case, and contact an experienced and successful Manhattan car accident attorney with any additional questions.

Pile-up on the Van Wyck Expressway

The case of Irvin v. Queens Borough Corporation et al., is based on a crash involving a sedan, Jeep, and black SUV. By one account, the driver of the lead car, Stacey Irvin, was stopped in traffic. Lucas Berger, the driver of the Jeep, noticed that traffic ahead of him had begun to slow down and applied his brakes. When he looked in his rear-view mirror, he saw a black SUV heading toward him at a high rate of speed. Berger tried to merge into the lane to the right to avoid a crash, but the SUV, driven by Mohammed Islam, hit the Jeep.

According to Islam, traffic had been moving at a steady pace prior to the crash. As he watched the traffic ahead of him, he testified that he saw the Jeep hit the car in front of it, come to a sudden stop, and try to move into the right lane. He honked, tried to brake, and attempted to merge into the left lane to avoid a crash, but nevertheless hit the Jeep. In contrast, Berger claimed that it was the SUV that caused his Jeep to hit Irvin’s sedan, and Irvin testified that she felt only one impact.

Here, Islam testified that it was Berger’s sudden stop which caused him to hit the Jeep. Normally, courts do not excuse the rear driver from being deemed negligent solely on the basis that the forward car stopped suddenly. However, if the rear driver can show that they believed traffic would continue moving smoothly when the forward driver came to a sudden stop, the court may find that the forward driver was also negligent in contributing to the accident occurring. In this case, the judge ruled that Berger’s sudden stop raised a question of whether he was negligent, as well. Since there was a possibility that Berger may have been legally responsible for the crash occurring, the judge denied his summary judgment motion to dismiss the claims against him.

If you or someone you love has been injured in a New York car accident, find out if you have a right to money damages as a result of your accident by contacting Manhattan personal injury lawyer Leandros A. Vrionedes for a free consultation at 212-889-9362, or in Queens at 800-634-8144.

By Leandros Vrionedes | Posted on April 20, 2018
Skip sidebar and go to footer