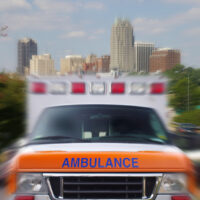 In 2009, Eutisha Rennix suffered an asthma attack while working at Au Bon Pain in Brooklyn.  Her coworkers notified the two uniformed EMTs who were in the restaurant at the time.  The EMTs called the incident into the dispatch center, but they did not attempt to help or check on Rennix since they had no equipment.  Rennix, who was pregnant, was transported to the hospital and later died. Her daughter was delivered, but she also died.  The Rennix family brought a wrongful death lawsuit against the City of New York. They argued that the City—through its EMT—was negligent because it refused to provide care to Rennix and ignored requests to help.  The City made a motion for summary judgment to dismiss the complaint.

In order to determine whether the City is liable for negligence, a special duty must exist. When the government performs any of its functions, there is no liability if no special duty is owed to the injured party.  In New York, a special duty exists when: 1.) a law is made to protect a certain type of plaintiff, 2.) the government voluntarily takes on a higher duty than what it owes to the general public, or 3.) the government takes control over a dangerous and known safety violation.

The Court found that even though the evidence shows that the EMT’s decision to not help Rennix was outrageous and deserving of disciplinary action, there was no evidence of a special duty. The law made to protect this type of plaintiff applies to criminal liability—not this negligence liability lawsuit.  The EMT never made contact with Rennix, so there was no voluntary action that could create a special duty.  Since the lawsuit is about a failure to help, the EMT did not take control over a dangerous and known safety condition.  Therefore, the Court held that the City could not be held liable for negligence—gross or otherwise.  The Court granted the defendant’s motion for summary judgment.