Can Housemates be Liable for a Cotenant’s Dog Attack? 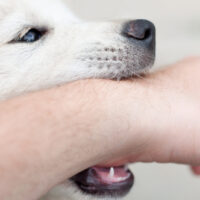 When a dog bites or attacks a person, the dog’s owner is strictly liable for the damages caused if the owner knew or should have known about the animal’s vicious propensity. What about other people who live in the same house but do not own the dog? Can they ever be held liable for an attack? This question was recently addressed by the Appellate Division of the Supreme Court of New York, Second Department, in the case of Matthew H. v. County of Nassau.

The tragic events in this case involve a four-year old boy in East Meadow who was riding his tricycle on the sidewalk outside of his house when he was attacked by two Rottweilers and a bulldog, who injured him severely. The three dogs were roaming free in the neighborhood after escaping from a house whether the dogs’ owner – a college student – lived with three housemates.

The plaintiff sued the dogs’ owner as well as the others living in the house under a variety of legal theories, including negligence, strict liability, and Agriculture and Markets Law 123(10). However, the Supreme Court, Nassau County, granted the cotenants’ motion for summary judgment dismissing the strict liability claim, and found that only the owner was responsible under the law which imposes liability on a person who harbors or keeps an animal with knowledge of its vicious propensities.

This appeal followed, with the Appeals Court framing the question as whether cotenants in leased premises can be held strictly liable for a vicious attack by dogs owned solely by another cotenant. The court answered that question yes, provided that there is evidence the cotenants participated in the care of the dogs in their household to a sufficient degree to support a finding that they joined with the dogs’ owner in harboring the animals.

The housemates’ defense in this case was that they did not “own or harbor” the animals, but the evidence showed otherwise. The owner had asked his housemates to feed his dogs and let them out when he wasn’t around, which they did. The court pointed to New York Agriculture & Markets Law, as well as laws of the Town of Hempstead, which defined harboring an animal as providing food or shelter. There are certainly enough questions regarding the dominion and control exercised by the housemates over the animals that summary judgment should not have been granted by the trial court.

As to the defendants’ knowledge of the dogs’ vicious propensities, the owner was aware that one of his dogs had previously attacked and killed a pet rabbit and was supposed to keep the dog caged or leashed and muzzled when out. It appears that various housemates knew some of these details and were also aware that the dogs could escape the yard and roam the neighborhood unattended. These facts may also be used against the defendants at trial to hold them strictly liable, if it is found that they “harbored” the animals within the meaning of the law.