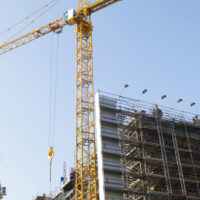 There are currently more cranes operating on New York City construction sites than at any time since the 2008 surge in building. Unfortunately, cranes bring with them the potential to do enormous damage, such as the incident in February of this year when a falling 500-foot crane took the life of a pedestrian and injured three others in Tribeca. Recently, safety authorities have been taking steps to reduce the risk of serious injury posed by cranes on New York construction sites.

The licensing and training of crane operators has always been taken seriously by the Local 14 International Union of Operating Engineers, which counts among its members the city’s crane operators. “There is no room for error. It took me 10 years before I was allowed anywhere near them,” said one union official. Local 14 has recently acquired a crane simulator, not unlike the cockpit simulators used in training pilots, and requires that operators complete rigorous certification to receive a license. The union emphasizes, however, that cranes are operated not just by someone in the cab, but by an entire team, including the engineer designing the crane and laying out its weight limits and functions, the manufacturer, the owner, and the rigger organizing the crane’s loads. If even one of these parties is negligent in carrying out their duties, construction workers on the job site or passersby below can receive serious or fatal injuries.

In the wake of the Tribeca crane collapse, the city of New York created the Crane Technical Working Group, a body designed to examine the causes of crane accidents and suggest ways to reduce the threat they pose to citizens and workers. According to statistics from the Crane Technical Working group, the point at which more errors resulting in lethal or severe injuries tend to occur is when the cranes are being assembled and disassembled. While the cause of the February collapse is not precisely known, experts have suggested that the crane toppled when a gust of wind reaching speeds of over 40 mph forced the crane over, while it was already being lowered due to weather advisories. Among the new safety controls which the commission recommended were the introduction of wind-measuring gauges on cranes, as well as “black box”-style devices which will record the crane’s operation data.

If you have been injured on the job in New York and need help obtaining the compensation you deserve for your lost wages, medical expenses, and pain and suffering, contact experienced and dedicated Manhattan construction accident attorney Leandros A. Vrionedes for a consultation on your case, in New York City at 212-889-9362, and in Queens at 718-777-5895.

By Leandros Vrionedes | Posted on June 30, 2016
Skip sidebar and go to footer