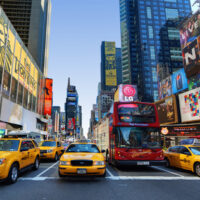 On October 13, 2011, Melissa Guzy was crossing the street in the crosswalk at the intersection of East 23rd Street and Park Avenue South in Manhattan when she was struck and injured by a city bus.

This process dragged on for well over a year and a half before the plaintiff finally filed a lawsuit in the Supreme Court, New York County, on August 15, 2013. Unfortunately, the time limit to file a personal injury lawsuit against the Transit Authority is one year and four months from the date of the accident (see Public Authorities Law, section 1212). The Transit Authority moved to dismiss the claim because it was filed too late. The Supreme Court agreed, and the case of Guzy v. New York City was dismissed.

The court disagreed with the plaintiff, however. According to the court, since the Transit Authority did not intentionally deceive or trick the plaintiff into not filing a lawsuit within the statutory time frame, the defendant could assert the statute of limitations as a valid defense.

It cannot be stressed enough how important it is to pay attention to timelines and deadlines for filing a lawsuit. The rules change depending upon the type of case (personal injury, wrongful death, medical malpractice…) and the type of defendant (private party, City of New York, Transit Authority…), and they are especially tricky when dealing with municipal defendants, where there are notice requirements and dates to meet in addition to the statute of limitations. Make sure you contact an experienced New York City personal injury attorney as soon as possible after the accident to ensure that all important timelines and deadlines are met. It would be a shame to lose your lawsuit on a technicality and not be able to recover compensation to help with your medical expenses, lost wages, pain and suffering, and other legal damages.