Claim against City Fails for Lack of Notice 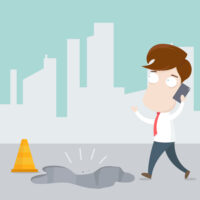 The City of New York does not make it easy to file a claim for personal injury damages against it. A claimant needs representation from an attorney who is highly experienced in prosecuting accident claims against the city. Not only will a knowledgeable New York municipal liability lawyer understand the technical requirements of filing a claim against the city; they will also be able to provide an educated assessment of whether your claim is worth pursuing or if it seems doomed to fail, along with the facts that are needed to find the answer to this question.

A recent decision by a New York trial judge shows how a lawsuit for damages can be sunk when it fails to meet the technical requirements for a claim against the city. The case, titled Merrill v. City of New York, was based on a trip-and-fall accident. Ashley Merrill, the plaintiff, was injured when she tripped on two potholes on 102nd Street at the intersection with Second Avenue. There were no signs warning of the potholes. Merrill filed a claim against both a construction company operating near the site of the potholes, as well as the City of New York, arguing that one or both of these entities had created the hazards or negligently allowed the hazard to exist unrepaired.

The construction company sought to have the claim against it dismissed. The company argued that it hadn’t done any excavating near the site of the accident, nor had it been transporting heavy equipment on the street in a way that could’ve created the potholes. The city also sought to dismiss Merrill’s claim, on the basis that it had no notice of the hazards offering them a chance to repair them, and thus could not be held liable for the costs of Merrill’s injuries.

Written notice requirement in claims against the city

When a premises liability claim is filed against the City of New York, however, an accident victim has to show that the city had prior written notice that conforms to a specific definition of “written notice.” Notes taken during a phone call where a citizen called to complain, for example, would not qualify as “written notice” on which an accident victim could rely when filing a claim. Even if a work order was created after a citizen complaint was filed, this would not constitute the necessary notice. After receiving a complaint, the Department of Transportation must inspect the complained-about site. If a work order is issued in response to that inspection, only then will the work order qualify as written notice to the city that a hazard exists and must be repaired.

In the recent case, the city’s lawyers presented the testimony of city employees who had searched extensively for work permits issued for work on that section of 102nd Street, or for complaints about potholes on that stretch of the street. There were no work permits issued for that precise location. Any complaints about potholes near the site of Merrill’s accident had been accompanied by work requests that had since been completed. Additionally, the city presented evidence that the Big Apple Map for the location (a map service that keeps a record of the location of all known potholes and sidewalk defects) did not indicate any potholes in the street where Merrill fell. The judge concluded that Merrill’s claim against the city had to be dismissed for lack of notice.

If you’ve been injured in a trip-and-fall accident in New York, find out whether you should file a lawsuit based on your injuries by getting a free consultation on your claim from the knowledgeable and skilled Manhattan personal injury lawyer Leandros A. Vrionedes, at 212-889-9362, or in Queens at 718-777-5895.

By Leandros Vrionedes | Posted on September 15, 2017
Skip sidebar and go to footer