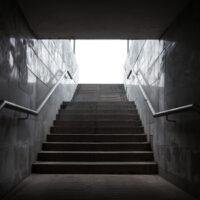 On August 25th, 2009, Roberta Rappaport was coming down the steps outside of 504 3rd Avenue, a/k/a 166 East 34 Street, in New York City when she tripped on a metal tab protruding from the bottom of the handrail. She fell to the ground and broke her right elbow.

In the ensuing litigation, Ms. Rappaport sued the following: the owner of the premises; a ground floor tenant and one of its subsidiaries; the lessee of the store where the staircase was; the landlord responsible for operation and maintenance of the building; the managing agent; the contractor who had been hired to work on the handrails; and a prior tenant of the building.

The litigation had generated an enormous amount of third-party claims and cross-claims among the defendants, as each tried to show why someone else was responsible and they should be removed from the lawsuit. The court’s September 2nd opinion dealt with these defendants’ motions for summary judgment to dismiss the complaints against them.

Oxford News, the owner of the store where the accident occurred, argued that it was not responsible because it did not maintain, repair or control the property. The staircase where the plaintiff tripped led to a public sidewalk in front of Oxford News. It is well-settled law in New York that “[a] party occupying property abutting a public sidewalk is not liable for the defect thereon, unless the party created the defect or made special use of the area.” The court held that the doctrine of special use does not apply to Oxford and that Oxford demonstrated that it did not create the defect. The claims against Oxford were dismissed.

Torpedo Iron Works, the company which worked on the handrail, argued that it did not owe any legal duty to the plaintiff, that it did not create the condition (Torpedo did not work at the bottom of the handrail at the place where the metal piece was sticking out), and that there was no evidence it was negligent. The court agreed, and the claims against Torpedo were dismissed.

Other defendants argued that they were not liable as out-of-possession landlords and that MHM was the duly authorized landlord. The court agreed that MHM was the landlord and had a duty to maintain the property in a reasonably safe condition. The court also noted that the condition was outdoors and obvious, and there was even testimony that MHM had actual notice of the condition five months prior to the accident. Several other defendants were dismissed from the suit.

The plaintiff and defendant both had expert witnesses who testified and reached different conclusions about whether the tab created a tripping hazard. Although many of the claims were dismissed, there are still claims and parties remaining, and the long march to trial continues.