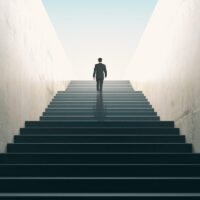 New York City’s building code requires that “interior stairs” of buildings be kept free from obstructions, and a person injured due to obstructed stairs could sue the landlord or building owner for damages caused by the obstruction in a slip and fall. The Building Code identifies many different types of stairs, such as “interior stairs,” “exterior stairs,” and “access stairs.” Up to now, the courts have not had much occasion to decide where sidewalk trapdoor stairs fit into this scheme, but in a recent decision from Bronx County, the judge ruled that they are not interior stairs and dismissed the case of a man who was injured when he slipped and fell on the stairs.

The plaintiff in Bautista v. 85th Columbus Corp. was performing work that required him to enter the basement of a building on Columbus Avenue in Manhattan, which was accessible through a sidewalk trapdoor. The tenant who ran a deli on the first floor and was leasing the first floor and the basement had installed a conveyor belt to move deliveries to the basement. The plaintiff claimed he slipped on the stairs and got his hand caught in the conveyor belt machinery, which obstructed most of the stairway.