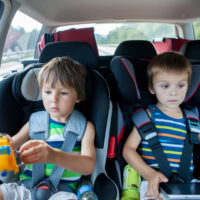 The roads can be a dangerous place for people of all ages, including young children. Child passengers depend on the protection of their parents or guardians in protecting them from injuries, both through careful and attentive driving, and by using proper safety restraints. However, even well-intentioned parents are prone to occasional lapses in concern for safety. Sometimes it feels easier to allow a tantrum-throwing child to sit in the front seat, or not to sit in their safety seat “just this once,” rather than to be made late and stressed by wrangling the child into their seat. Unfortunately, it only takes a moment on the road for a car accident to occur, and a failure to properly restrain a child can have serious consequences.

According to the Centers for Disease Control, motor vehicle accidents are the leading cause of death for children in the United States. One group of researchers recently published a study looking at the contributing factors in fatal accidents which resulted in the death of a child. The study was published in the Journal of Pediatrics. The researchers used data collected from over 18,000 fatal accidents that had occurred throughout the country which had involved a child. In 16% of those accidents, a child had been killed. The researchers looked at the rates of child fatalities based on various factors, such as the type of road on which the vehicles were traveling at the time of the crash, the types of vehicles involved, the region of the country where the crash occurred, and the type of safety restraint used on the child involved (if any).

According to the study, children were not properly restrained in 20% of all fatal accidents in which they were involved. However, children were either not restrained at all or not correctly restrained in 43% of all accidents involving the death of a child. In an additional 13% of accidents resulting in fatal injuries to a child, that child was seated in the front seat of the vehicle inappropriately. While New York laws require that children under eight ride in a child safety device and ride in the back seat whenever possible, this study offers parents a reminder of the critical importance of securing their children in an appropriate safety or booster seat whenever they’re in the car.

It is important to know that if your child is seriously injured in a New York car accident due in part to not being properly restrained, this does not mean you do not have a claim against the negligent driver for causing the accident. This added element may make your case more complicated, however, so you will need to be sure to obtain strong representation from an experienced attorney to make sure you obtain the compensation you will need for your child.

If you or your child has been injured in a New York traffic accident, get help seeking the damages you deserve for your injuries by contacting the aggressive and effective Manhattan personal injury lawyer Leandros A. Vrionedes for a consultation, at 212-889-9362, or in Queens at 718-777-5895.

By Leandros Vrionedes | Posted on June 19, 2017
Skip sidebar and go to footer