Rear-End Accidents Are the Responsibility of Rear Drivers, Unless They Aren’t 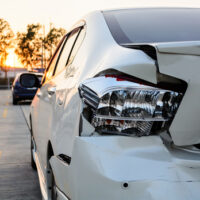 Rear-end car accidents are often clearly the responsibility of the rear driver. When the facts are clear—say, the rear driver was texting at the time of the crash—these cases can often be decided via the expedited process of summary judgment, so that the plaintiff can receive compensation sooner than if she were required to go through with a full trial. Sometimes, however, the facts are not quite so clear, such as in the case of Philip v. D & D Carting Co., Inc., recently decided by the New York Supreme Court Appellate Division.

In the accident forming the basis for the lawsuit, the plaintiff, Meshele Philip, was riding in a passenger van owned by Sunjet Express (Sunjet), wearing her seatbelt at the time of the collision. The van was stopped by the side of the road to discharge some passengers. While doing so, a garbage truck driven by Eric Gutierrez and owned by D & D Carting Co. (D & D) collided with the rear of the van, injuring a number of the van’s passengers, including Philip. Philip filed a lawsuit against both Sunjet and D & D for her injuries. Sunjet filed a motion to dismiss the claims against it, arguing that only D & D was responsible for Philip’s injuries. Additionally, Philip filed a motion for summary judgment against D & D, requesting that the court determine that she bore no responsibility for her injuries, and that Gutierrez’s inability to maintain control over the truck was the sole cause of her injuries, making D & D the responsible party.

D & D contested both of these motions. Gutierrez stated in an affidavit that he had been approaching a red light at an intersection before reaching the van and applied his brakes normally, but skidded in a patch of oil on the road. D & D thus argued that it had been an “unavoidable accident” resulting from the oil being on the road, for which they bore no responsibility. Gutierrez took photos of the oily road at the time of the crash, which were presented to the court, but the photos were of low quality. Gutierrez also argued that the van had been partially blocking a lane of traffic while it let off passengers, making Sunjet partially responsible for the accident.

The trial court granted Philip’s motion, determining that she bore no responsibility for her injuries, and that D & D was liable for her injuries. D & D appealed this decision regarding their own liability, and the court hearing the appeal agreed, partially reversing the trial court’s decision. In its opinion, the Appellate Division explained how liability is determined in regards to rear-end car accidents where the front car is stopped at the time of the crash. The rear vehicle is presumed to be responsible for damage to the front vehicle and its passengers, so that the driver of the rear vehicle has to produce some evidence that the crash happened for non-negligent reasons in order not to be found liable. The plaintiff also has to show that she was not responsible for the accident or her injuries. Should the plaintiff show both that the other driver was negligent and that she was not at fault at all, she will win a motion for summary judgment.

Here, the Appellate Division determined that Philip had established that she was not at fault, and that, moving forward in this case, future courts can assume that Philip lacked any responsibility for her injuries. However, the Appellate Division found that, while D & D’s truck colliding with the van did cause her injuries, it was not as clear that D & D was negligent in causing the crash. The court described previous cases where unavoidable skids in water, fuel, or oil on the pavement had led to a finding that the rear driver was not driving negligently when a crash occurred. The Appellate Division ruled that Philip’s case should move forward toward trial, without a determination that D & D is the only responsible party. The Appellate Division went on to caution trial courts not to assume that drivers of rear vehicles in rear-end crashes are always automatically liable, and that courts should take the time to determine that drivers of the front vehicle were not liable in any way, as well as that there was not a good reason for the rear vehicle to have collided with the front vehicle.

If you have been involved in a rear-end accident and require legal assistance in obtaining the compensation to which you’re entitled, contact the law offices of Leandros A. Vrionedes for a free consultation on your potential claims.

By Leandros Vrionedes | Posted on January 4, 2016
Skip sidebar and go to footer