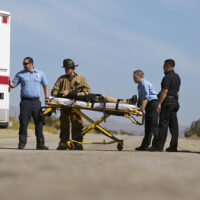 While not based on the type of accident or injuries one tends to imagine when considering the ways that police officers are hurt on the job, one officer was nevertheless seriously hurt when tripping over a power cord. Indeed, the fact that the accident was not one typically associated with the dangers of police work is the reason the officer will now be permitted to move forward with her claim for personal injury damages, offering her a chance to receive compensation for the medical expenses and pain and suffering she experienced after being injured by a workplace hazard.

The case, Kelly v. City of New York, is based on an incident which occurred in the office area of a Queens medical unit. Officer Maryellyn Kelly, the plaintiff, had been assigned to the medical unit. While walking through the office, Kelly caught her foot on an electrical cord which stretched from a paper shredder across the room to an outlet. Kelly fell forward through a doorway, injuring her ankle and back in the process. Kelly and her husband sued New York City for the costs of her medical care both under general principles of negligence, and under General Municipal Law § 205-e, which allows police officers to bring lawsuits for personal injuries against an employer when that employer has violated a law that led to the accident.

The City filed a motion to dismiss Kelly’s claims, alleging that the “firefighter rule” barred her from recovering damages, and also that she hadn’t shown that the City was negligent under § 205-e. The trial court agreed and dismissed Kelly’s claims. The Appellate Division reversed this decision, however. The judge first explained that the firefighter rule did not apply to this injury: “The firefighter rule provides that police and firefighters may not recover in common-law negligence for line-of-duty injuries resulting from risks associated with the particular dangers inherent in that type of employment.” Here, the judge explained, the officer wasn’t performing a police function that put her at a greater risk of this, or any, type of injury. Instead, performing her job duties simply provided the occasion for the injury.

The judge also found that the City did not successfully show that Kelly’s claim for damages under 205-e should be dismissed. Kelly based her 205-e claim on New York Labor Law § 27-a(3)(a)(1), which requires that employers provide workplaces that are free of hazards that could injure or kill employees. While the City had argued to the trial court that the electrical cord on which Kelly tripped was not a “recognized hazard,” which would require them to take action to right the hazard, the Appellate Division disagreed. Kelly was permitted to continue pursuing her claims under both legal theories.

If you’re a New York City public employee who has been hurt on the job and are in need of legal assistance in pursuing your claim for damages, contact the law offices of Leandros A. Vrionedes for a consultation on your claims.

By Leandros Vrionedes | Posted on December 22, 2015
Skip sidebar and go to footer