Plaintiff Who Caused Crash Not Entitled to Recover for Personal Injury 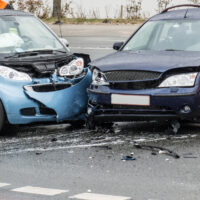 Earlier this year, a judge in the New York County Supreme Court granted the defendant’s motion for summary judgment and dismissed the plaintiff’s personal injury lawsuit. The plaintiff’s own negligence was cited as the sole proximate cause of the auto accident which caused his injuries, and the judge did not think the plaintiff raised any serious question of fact about any comparative negligence on the defendant’s part to warrant a trial.

The car crash at the heart of the case in Gomez v. Yussuf occurred at the intersection of Rockaway Boulevard and Beach 56th Street in Queens. The drivers were in their left lanes and headed in opposite directions on Rockaway Boulevard. Both cars were already in the intersection when the plaintiff decided to execute a left turn without first stopping and waiting for a clear opportunity. There was no evidence that the plaintiff used his turn signal either.

Nevertheless, the plaintiff argued that there was a question of fact regarding the defendant’s comparative negligence. Under New York law, an injured plaintiff can recover compensation for personal injury from a negligent defendant where both parties are at fault, even if the plaintiff is more at fault than the defendant. Any award of damages is reduced proportionately, however.

Since the defendant was the one moving for summary judgment, she had the burden of establishing that the accident was not proximately caused by any negligence on her part. She did that by showing she had the right of way and did not see the defendant until it was too late. Under New York law, a driver with the right of way is entitled to expect that other drivers will obey the traffic laws. Also, a driver with the right of way who only has seconds to react to a vehicle which has failed to yield is not comparatively at fault for failing to avoid the collision.