Officer Injured in Scuffle Sues Arrestee but Has Case Dismissed 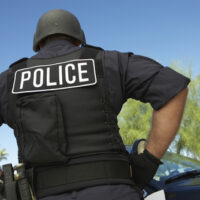 Police officers can be injured in the line of duty in many ways, including when having to physically subdue a suspect who is violently resisting arrest. In most cases, the officer cannot sue another party for an injury which occurs while performing police duties, such as an injury suffered while making a lawful arrest. However, there is an exception when the harm occurred due to a violation of a law which increased the risk of injury to the officer. The Supreme Court, Queens County, recently discussed the application of this legal theory in the case of Randall v. Morand.

The officer in this case conducted a traffic stop in Kings County, pulling over the driver for having tinted windows and an obscured license plate. The driver of the car was hostile and belligerent. In fact, while the officer was in his patrol car writing the ticket, the driver repeatedly got out of her own car to curse the officer. When the officer got out of his car to effect an arrest, the driver ran back into her car and violently resisted being arrested, including scratching the officer on his hand and kicking him in the legs and groin repeatedly. One of these kicks severely injured the officer, requiring arthroscopic surgery to repair a torn meniscus in his knee. The defendant, for her part, claimed the officer grabbed her and sprained her wrist, yanked her out the car and threw her against it, and that she never kicked him or touched his body in any way.

The defendant was charged with resisting arrest, reckless endangerment in the second degree, and assault in the third degree. The injured officer also instituted a civil lawsuit against the defendant for his injuries, which brought into play General Municipal Law 205-e. This law does create a right for an officer to sue another for injuries caused by a person’s violation of state or local law. Unfortunately for the officer in this case, he could not show a link between the statutory violations in his complaint and his injuries.

The officer cited the provisions of the Vehicle and Traffic Law that the defendant was arrested for – driving with tinted windows and an obscured license plate. These violations, however, did not cause the officer’s injuries. In order for there to be civil liability, there must be some safety violation which increased the danger to the officer beyond what is normally expected in police work. For instance, if a police officer were injured by a reckless driver, then there might be liability under 205-e. Apparently, the officer’s complaint did state that he was struck by the defendant’s vehicle, but it does not appear that there was any evidence to support that claim.

For the officer to succeed in his case, he would have to identify a law that was violated and show the link between that violation and his injury. He did not do that here, and the judge dismissed his case, granting the defendant’s motion for summary judgment on the issue of liability.