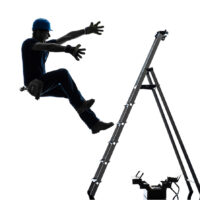 The Supreme Court of New York County has recently ruled that a property owner is legally responsible and liable under Labor Law § 240(1) for a construction worker’s injuries in a ladder fall accident. Learn about the claim below, and speak with a Manhattan injured worker attorney for more information.

Vasilios Pierrakeas was the injured worker and plaintiff in the newly-decided case (Pierrakeas v. 137 E. 38th Street, LLC). On the day of the accident, he was installing crown molding while working as an employee of All City Remodeling. His coworker, Enoc Galdamez, was working on a different project on the property while Pierrakeas was standing on a ladder to install the molding along the ceiling. Neither All City nor the building owner had provided any safety equipment for Pierrakeas to use while he worked on the ladder, nor a means of stabilizing or securing the ladder. Next to the ladder was a 12-inch stack of sheetrock. Pierrakeas descended from the ladder and accidentally stepped onto the stack of sheetrock rather than the ground, losing his balance in the process. He grabbed the ladder to regain his footing, but the ladder wobbled and Pierrakeas fell. He suffered several injuries, including a knee injury that forced him to miss work.

Pierrakeas filed a lawsuit against the owner of the building where the accident occurred, claiming that they had violated the New York Scaffold Law (Labor Law § 240(1)). This law makes employers and property owners liable for elevation-related injuries that occur during building construction, repair or alteration projects and obligates them to provide means of fall protection and ladder stabilization for workers. Pierrakeas’ attorneys also filed a partial summary judgment motion on that claim, arguing that there was no material evidence that the defendant could present that would prove they weren’t liable for Pierrakeas’ injuries.

The defendant contested this motion. They did not contest the fact that they didn’t provide any safety equipment, as required by § 240(1). However, they did argue that, by placing the ladder next to the stack of sheetrock, Pierrakeas was the sole proximate cause of his injuries. § 240(1) states that, when an injured worker’s actions were the sole cause of his injuries, then the property owner cannot be held financially responsible for those injuries.

The judge rejected the defendant’s arguments, granting Pierrakeas’ motion and finding the defendant liable under § 240(1). In his opinion, the judge pointed out that this exception to liability only applies where the worker either refuses to use or misuses safety equipment provided by the employer or property owner. In this case, the judge saw no evidence showing that Pierrakeas had chosen an inappropriate ladder for the job he was doing, that he misused the ladder in some way, or that he had safer options available to him. Even if, as the defendant argued, the placement of the ladder next to the pile of sheetrock was negligent, that wasn’t enough to eliminate the defendant’s liability under § 240(1) for failing to provide safety equipment to its workers.

If you have been injured on the job in New York and want help getting the money you need to cover the costs of your injuries, contact the seasoned, aggressive, and dedicated Manhattan construction accident attorney Leandros A. Vrionedes for a free consultation at 212-889-9362, or in Queens at 718-777-5895.

By Leandros Vrionedes | Posted on November 8, 2018
Skip sidebar and go to footer