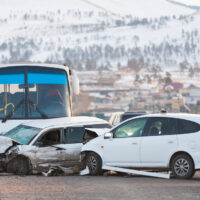 Under ideal circumstances, an insurance settlement would provide fast and full compensation to traffic accident victims, allowing everyone to avoid the time and expense of a lawsuit. Unfortunately, this isn’t always the case. Insurance may be insufficient to cover the full cost of the victim’s injuries. Also, settlement of insurance claims will not provide all forms of compensation available through a personal injury lawsuit, such as compensation for a victim’s pain and suffering. For these reasons, car accident victims may need to file a lawsuit against the at-fault driver, and those at-fault parties often contest these lawsuits for failing to meet the serious injury threshold.

When it comes to auto insurance, New York is a no-fault state. This alters the right of New York drivers to file a lawsuit in state court based on their injuries. Accident victims are required to rely on insurance to cover the cost of their injuries, rather than file a lawsuit, unless their injuries meet or exceed the so-called serious injury threshold. Accident victims can meet the serious injury threshold by showing that they suffered either an economic loss of over $50,000, or that they experienced “serious injury.” Under New York Insurance Law, “serious injury” can be defined in several ways, including a fracture, disfigurement, or permanent and consequential limitation of an organ or body part. At-fault drivers commonly challenge whether an injury is truly permanent, as well as whether the injury was pre-existing at the time of the accident, in an effort to have the personal injury lawsuit dismissed in favor of paying a smaller amount through an insurance claim.

A recent case decided by the New York Appellate Division provides an example of the type of challenges faced by accident victims when filing a lawsuit. The case, titled Lindo v. Brett, was filed by a driver who was injured in an accident with a bus operated by MTA Bus Company. The plaintiff, Andy Lindo, claimed that he suffered permanent injuries to his lumbar spine, cervical spine, right knee and right shoulder as the result of the accident.

The defendant bus company required that Lindo meet with its expert physicians to allow them the chance to assess whether his injuries should be considered “serious” under the law. Lindo was examined by two doctors hired by the defendant. One doctor concluded that Lindo’s spinal injuries were not permanent or disabling, but did not examine his knee or shoulder. The other doctor found that the plaintiff’s spinal injuries were the result of “degenerative disc disease” rather than trauma, and found no evidence of fracture or tears in the victims shoulder or knee.

Lindo presented a report from his own physicians which disagreed with the defendants’ doctors’ assessments. Lindo’s doctors found that Lindo’s condition did not stem from a pre-existing injury, and that they were “solely related” to the accident and had been induced by trauma. One doctor also concluded that Lindo would likely face a permanent partial disability.

The defendant filed a motion to dismiss Lindo’s claims. In order to have the lawsuit dismissed, the defendant would need to show that there was no significant factual dispute over whether or not the victim’s injuries could be considered “serious.” Despite evidence from Lindo’s doctors, the trial court dismissed Lindo’s claims for damages as having failed to meet the serious injury threshold. However, the Appellate Division disagreed. The judges hearing Lindo’s appeal concluded that he had presented sufficient evidence that no prior incidents had caused his injuries, and that the injuries were likely to partially disable him for the rest of his life. The Appellate Division found this evidence sufficient to allow Lindo’s claims to move forward toward trial.

If you’ve been hurt in a bus accident in New York, consult with a seasoned and knowledgeable attorney to find out if you may be eligible to file a lawsuit for money damages by contacting the Manhattan traffic accident attorney Leandros A. Vrionedes at 212-889-9362, or in Queens at 718-777-5895.

By Leandros Vrionedes | Posted on April 13, 2017
Skip sidebar and go to footer