Bike Injuries Up, Car Crashes Down Amid Coronavirus in New York 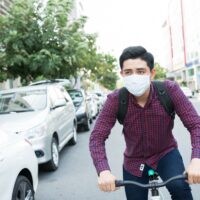 While the coronavirus crisis continues and self-quarantine orders are imposed, there are some positive takeaways: Less traffic on the road means less chance of a car crash or other traffic accident. Oddly, while the number of car accidents in New York City has decreased over the last few weeks, the number of bicycle accidents has actually increased. The increase is likely attributable to City officials, including Mayor de Blasio, calling for residents to bike to work in the weeks leading up to the total city shutdown, without the additional infrastructure in place to accommodate the additional bikers. Learn more about the change in accident demographics below and speak with a dedicated Manhattan car and bicycle accident attorney if you or a loved one has been hurt in a traffic accident in New York City.

According to statistics released by the NYPD, there was a sharp uptick in the number of cyclists injured on New York City roads between March 9 and March 15 as compared to earlier weeks. After City officials urged commuters to ride bikes rather than take mass transit, New Yorkers responded with a vengeance, and there was a sudden and massive increase in the number of bicyclists on the road. The City, cyclists, and other drivers were apparently not ready to handle the adjustment: There was a 43 percent increase in the number of bicycle injuries (80 injured cyclists) during the covered week as compared to the same week last year.

On a more positive note, rush-hour traffic has decreased significantly since the outbreak of the virus, as have traffic accidents and crash-related injuries. Even before the statewide shutdown order, traffic had dropped by at least 15 percent. During the March 9-15 time period, there was a 33 percent drop in overall crashes involving cars and other vehicles. Pedestrian injuries were down 17 percent, and vehicle occupant injuries were down 27 percent.

It is likely that the accident numbers have dropped even further and will continue to stay low since Governor Cuomo issued his order shutting down all non-essential businesses across the state. New Yorkers are still permitted to go outside and go out for the essentials (the doctor, groceries), but they are strongly encouraged to stay inside and limit any public gatherings. While it is difficult to look for any silver lining amid the current crisis, a reduction in the number of traffic injuries and fatalities is at least one positive result for the time being.

If you’ve been hurt in a New York traffic accident and need passionate and talented representation for your claims, contact the Manhattan car accident lawyer Leandros A. Vrionedes for a free consultation on your case at 212-889-9362.

By Leandros Vrionedes | Posted on March 30, 2020
Skip sidebar and go to footer