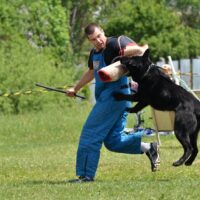 The First Department of the New York Appellate Division recently considered whether a claim could be made against a dog owner for injuries received not from a vicious dog, but from a dog that was simply not under an appropriate amount of control. The court dismissed the claim, but pointed out that the lack of recourse for the injured plaintiff may indicate a need for a change in the law.

The case in question is titled Scavetta v. Wechsler. The defendant, Stuart Wechsler, had tied his dog to a bike rack outside of a restaurant in Manhattan. Wechsler hadn’t checked whether the bike rack was bolted to the ground before walking away. Upon leaving the dog to walk into the restaurant, he heard metal scraping on the ground, and turned to see his dog take off down the street, dragging the bike rack. The plaintiff, Gregory Scavetta, saw the dog run under a car. When he went to check on the dog to see if it was injured, the dog bolted out straight toward him. The bike rack hit Scavetta, which caused one of his legs to get tangled in the rack’s bars. He was thrown to the ground and required medical attention for his left leg.

Claim for injuries and motion to dismiss

Scavetta filed a lawsuit against Wechsler, asserting that Wechsler had negligently caused Scavetta’s injuries by tying his dog to the bike rack, since he knew or should have known that the dog would be able to run away while dragging the rack. Wechsler filed a motion to dismiss the claim, asserting that New York State law doesn’t allow injury victims to sue for injuries caused by domestic animals that resulted from owner negligence. The claim was dismissed, and Scavetta appealed.

New York uses the “vicious propensity” doctrine to impose liability on animal owners when those animals injure others. This doctrine states that, if a pet owner is aware or should be aware that their animal tends to be aggressive or exhibit other behavior that could cause injury to others, then they will be held responsible for injuries caused when their animal exhibits that dangerous behavior. Under this rule, animal owners who haven’t been given a reason to believe that their animal would be violent or dangerous can’t be held liable for injuries their animals cause. In other words, the first bite is free, but the next one will cost you.

Many states have adopted a rule stating that animal owners can also be held liable to injury victims when the owner should have done something to prevent the harm, but didn’t. However, New York’s highest court, the Court of Appeals, has so far refused to adopt such a rule. In a case titled Bard v. Jahnke, the court refused to impose liability on the owner of an unrestrained bull when that bull attacked a worker on the owner’s farm. The court reaffirmed, in what is now known as the Bard rule, that unless an animal had exhibited a “vicious propensity” in the past, owners wouldn’t be liable for injuries caused by their animals. Since this case, judges in lower courts have often called for exceptions to—or abolition of—this rule when an owner has been negligent in some way in allowing their animal to cause injuries to someone else.

No liability for weaponizing a bike rack

In the case before the court, the plaintiff had argued that this case was different from Bard. He argued that the defendant had essentially weaponized the bike rack by tying it to his dog, which he should have known would run, making it the owner’s conduct rather than the dog’s conduct that caused his injuries. Reluctantly, the Appellate Division judges dismissed Scavetta’s claim for injuries. The court ruled that there was no discernible difference between Scavetta’s claims and other cases where the Bard rule has been applied, and that, without some evidence of the dog’s “vicious propensity,” Wechsler could not be held liable for injuries his dog caused.

In their opinion, the judges included an extensive discussion of the way they wished they could have decided the case. The court described a possible exception to Bard that, in order to uphold “the principles of fundamental fairness, responsibility for one’s actions, and societal expectations,” a “dog owner who attaches his or her dog to an unsecured, dangerous object, allowing the dog to drag the object through the streets and cause injury to others, may be held liable in negligence.” It is possible that, if the plaintiff appeals this decision, the Court of Appeals may hear this case and change the Bard rule to allow negligence claims against animal owners whose animals cause injury. For now, New York remains one of the country’s few states where animal owners can’t be sued for their negligence in handling their pets or farm animals.

If you’ve been hurt by a vicious dog, or otherwise injured by another person’s careless or reckless behavior in New York, contact the seasoned and trial-ready Manhattan personal injury lawyer Leandros A. Vrionedes for a free consultation, at 212-889-9362, or at 718-777-5895.

By Leandros Vrionedes | Posted on March 20, 2017
Skip sidebar and go to footer